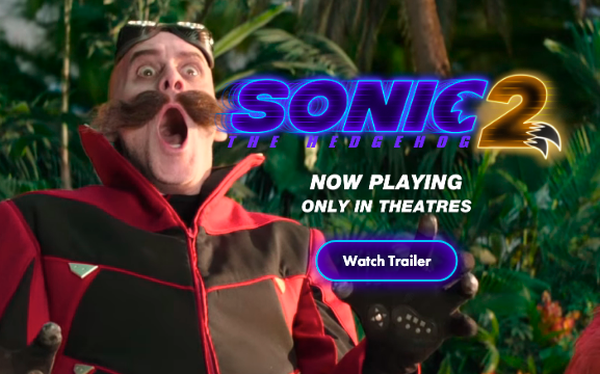 In a sign that a broader range of moviegoers has returned to theaters, Paramount Pictures’s "Sonic the Hedgehog 2" pulled in a massive $71 million over the most recent weekend in North American box-office revenue.

"This follow up to 2020’s 'Sonic The Hedgehog' takes over the crown from its predecessor as the biggest opening ever for a video-game adaptation and now shows that the family audience is back to the multiplex in a supersonic way,” says Paul Dergarabedian, senior media analyst of Comscore.

An estimated $15.62 million was spent on national TV advertising for the movie, producing 1.8 billion impressions from 2,950 airings, according to EDO Ad EnGage.

A higher projection of $18.0 million came from iSpot.tv. Over the most recent two week period, most of its TV impressions came from Nickelodeon, followed by TBS, Univision, Cartoon Network, and Comedy Central.

Universal Pictures' "Ambulance" was the only other wide release to launch this weekend, taking in $8.7 million. The R-rated suspense film, directed by Michael Bay, stars Jake Gyllenhaal.

Through just over three months of 2022 (January 1 though April 9), total U.S. national TV advertising spending for theatrical movies is estimated to be $407.9 million, according to iSpot. This comes in just below (6%) the pre-pandemic period in 2019 over the same period -- $431.9 million.