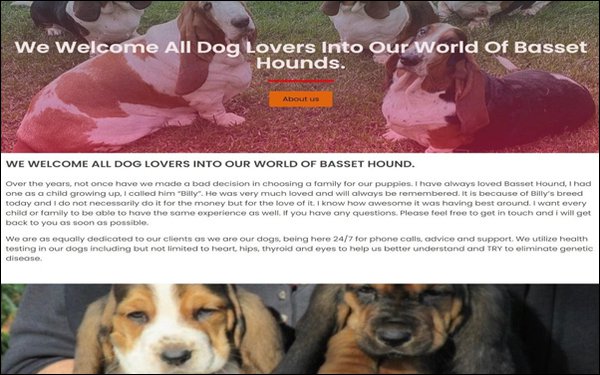 Google is suing an account holder based in Cameroon who allegedly used the company's email, voice and advertising services to dupe people into paying for puppies that never arrived.

“Nche Noel Ntse has been perpetrating a puppy fraud scheme to exploit the COVID-19 pandemic for personal gain, while taking advantage of unsuspecting and vulnerable victims,” Google alleges in a complaint filed Monday in U.S. District Court for the Northern District of California.

“Defendant does not actually sell puppies, and instead is running multiple international non-delivery scams with the intent to exploit the COVID-19 pandemic and the resulting high demand for puppies,” the company writes.

Google adds that Ntse "has used several Google services, such as Gmail and Google Voice, via dozens of fraudulent Google accounts, to communicate false promises to victims, register the fraudulent websites with U.S. internet hosting companies, and request and receive payments, all in violation of Google’s Terms of Service."

The company says it became aware of the scam after receving a report in September from the AARP, an organization for older Americans, which said it had learned of phony websites that purported to offer basset hound puppies for $700. Those websites were allegedly connected to Gmail addresses.

Google's investigation later turned up other websites, including one that purported to sell Maltipoo puppies for $700.

The company also says it uncovered a Google Ads account tied to at least one of the fraudulent websites.

Google claims Ntse violated the company's terms of service, which “injured Google by damaging the safety and integrity of its platform, negatively impacting its users and potential users.”

The company is seeking monetary damages and a court order banning Ntse from accessing Google services or maintaining a Google account. If granted as requested, that order would seemingly prohibit Ntse from using a wide range of services, including Google's search engine.

Given that Ntse resides in Cameroon, even if Google prevails in court it's not clear whether the company will actually be able to enforce a judgment.

Google said in a blog post that it sued in order to “set a legal precedent, protect victims, disrupt the scammer’s infrastructure, and raise public awareness.”

But Google's move could also suggest that the company is unable to handle scammers on its own, according to Santa Clara University law professor Eric Goldman.

“If Google knew how to manage fraudsters properly, it wouldn't need to run to court,” he says, adding that the lawsuit is “an indirect way of solving the problem” of fraudsters.

“The direct way is to figure it out, and keep them off the service,” he says.