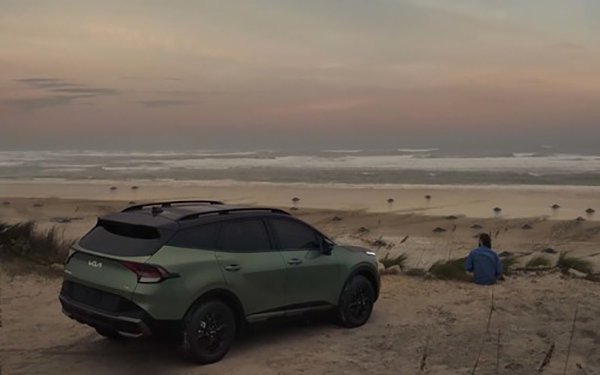 Kia America has geared up for a multichannel marketing campaign to promote its 2023 Kia Sportage subcompact SUV.

Larger and more fuel-efficient than previous cars, this fifth-generation model includes a number of firsts, including an available dual-panoramic curved digital display, a new 2.5-liter I-4 engine with new 8-speed automatic transmission and targeted 187 HP.

The campaign includes broadcast, print, out-of-home and digital components, as well as a partnership with Sea Turtle, Inc., a Padre Island, Texas-based nonprofit dedicated to the conservation of the endangered sea turtle population.

Called “Make More Good, the campaign centers on a 30-second TV spot, “Beachcomber,” that highlights a Sportage X-Pro driver hitching a drag rake to the car, then collecting trash from the beach. As the driver looks back at the waves, sea turtles head to the beach to nest in the sand. A voiceover says: “Make more good, in the all-new Sportage X-Pro.”

“The inspiring message is clear — to live in the world we want to, we all must be a part of making it a better place. With hybrid and plug-in hybrid capabilities added to the all-new Kia Sportage lineup, we all can make a whole lot of good,” said Russell Wager, vice president, marketing, Kia America.

In this instance, he said, it is helping the eco-org “strive to save these majestic creatures.”

The Sea Turtle alliance is part of the automaker’s Accelerate the Good initiative, encouraging its customers to do good works.

A plus for American workers: Sportage trims will now be assembled in the U.S at Kia's manufacturing plant in West Point, Georgia.