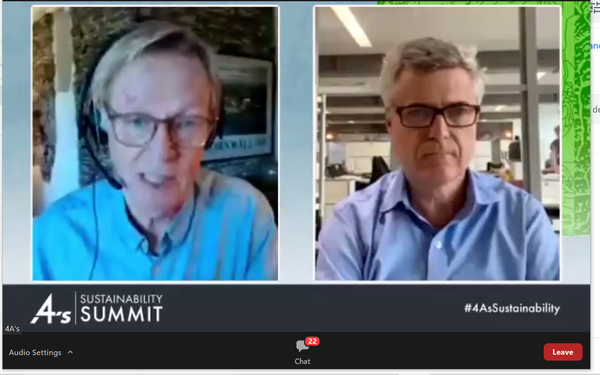 WPP CEO Mark Read offered some eye-opening numbers today on the industry’s carbon footprint and the opportunity to reduce it.

Read, speaking at the 4A’s virtual Sustainability Summit, noted that pre-covid, the company would do an estimated 1,500 on-location advertising commercial shoots around the world each year. That’s a lot of travel by multiple parties including agency people, client representatives, production teams and more.

But here’s the kicker: 90% of the footage shot is never used, Read said. Assuming most advertising agencies work in similar ways on commercial production, that’s a lot of carbon usage, most of it completely wasted.

And that’s just one facet—and not the biggest--of how the industry utilizes its carbon footprint in highly inefficient ways.

Read said that media has four times the carbon footprint impact on the planet as production.

Pressure is being applied in multiple ways to help the industry change. Like other holding companies, WPP has its own ambitious carbon reduction goals. And most of its top clients have their own targets while the firm is putting pressure on its supply chain to make changes as well. For example, Read noted that it will be placing more and more of the $50 billion in media budgets it manages annually with media companies that are focused on reducing their carbon footprints.

One thing that is lacking is a global agency organization to help develop and promote green standards, Read noted.

To a degree COVID has forced a certain amount of efficiency. Read said he stopped traveling during the height of the pandemic but engaged with twice as many clients remotely.

Read and others speaking at the conference made the point that business agendas and sustainability don’t have to conflict. In fact, the more the industry views sustainability as a business opportunity the more progress will be made achieving sustainability goals.

4As CEO Marla Kaplowitz noted that consumers are increasingly demanding to know what companies are doing to be greener. “Sitting on the sideline is no longer an option,” she said.

She noted ironically that one of the event’s scheduled speakers, Andy Last, CEO MullenLowe salt, and an authority on corporate sustainability, was stuck in South Africa without the ability to join virtually. The reason: power had been knocked out due to extensive flooding in the country caused by climate change.

Another authority on the subject, Oliver Joyce, global chief transformation officer, Mindshare and decarbonization program executive director, GroupM, was able to join. He cited a recent WFA survey which highlights one of the industry’s challenges in achieving progress on the sustainability front. The survey showed that nearly three-quarters of the respondents believed their marketing goals were incompatible with corporate sustainability efforts. That, he noted, presents a “massive credibility issue” for the industry if it’s to be considered an architect of corporate sustainability solutions.

“Architects are qualified,” said Joyce. “They create solutions, not just tick the boxes.” The industry needs to get its own house in order, he added. But its also a collaborative effort among a number of sectors including engineers, financiers and policy makers.

There’s also a wide gap between what people say—they view climate change as a huge problem—and how they act by not making sustainable choices in day-to-day life. And marketers need to do better at delivering products and services that close the gap, said Joyce.

Asked how brands and agencies can get ahead of the curve on achieving sustainability goals Joyce replied, “treat it like digital transformation.” In other words, treat it like a business challenge that must be overcome “or you get left behind.” Like digital transformation, huge investments will be required to achieve sustainability, and building business cases for those investments is critical. Achieving sustainability, Joyce asserted “is the biggest marketing challenge of our generation.”

Two McCann Worldgroup executives--Jaclyn Kaminski, Global Director of Sustainability and Nadia Tuma-Weldon, Director of Truth Central—reviewed recent research that found a disconnect between sustainability as a huge cultural movement on the one hand but with a surprising lack of action on the other.

Part of the problem is the way the issue is talked about, the research found. Messaging needs to be more nuanced and “humanized.”

The research found people tend to have one of five different views on climate change including nearly 40% who feel “powerless” to do anything about the problem. About a third are described as “anxious activists” while others wring their hands when a disaster related to climate change occurs or don’t really care about the issue at all. The smallest segment—7%--are outright climate change deniers.

Shaming people leads to paralysis and inaction, per the research. And marketers force people to make hard decisions about what products to buy when there should be “easy defaults” that are the most sustainable.

But brands would seem to have an edge in driving change according to the research, which found that 77% people believe brands are better positioned to solve climate/sustainability issues than the government.