CNN+ To Be Shut Down Just One Month After Launch 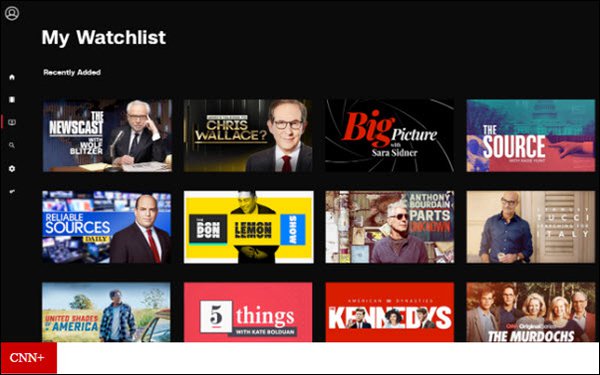 CNN+ -- launched on March 29, just days before the April 8 formal close of the WarnerMedia-Discovery merger -- will be shut down as of April 30.

“This is not a decision about quality; we appreciate all of the work, ambition and creativity that went into building CNN+, an organization with terrific talent and compelling programming,” Chris Licht, incoming chairman and CEO of CNN Worldwide, said in a statement. “But our customers and CNN will be best served with a simpler streaming choice.”

Licht reportedly set up a meeting with CNN staff for noon today.

The CNN+ shutdown was widely predicted by media watchers, but many thought a decision about CNN+'s fate would not be made publicly until after May 1, Licht's official start date.

Two weeks after its launch, CNN+ had reportedly attracted only about 10,000 subscribers.

Moreover, CEO David Zaslav and other leaders of Warner Bros. Discovery were reportedly frustrated that outgoing WarnerMedia CEO Jason Kilar and Jeff Zucker, who was president of CNN until his resignation in February, had pushed through the CNN+ launch just before they assumed control.

This week, Axios reported that the new leadership had suspended all external marketing spend for CNN+ and replaced CNN CFO Brad Ferrer with Neil Chugani, Discovery's current CFO for streaming and international, as part of a broader restructuring.

WarnerMedia and former CNN management had envisioned CNN+ as a "lifeboat" for the CNN brand as consumers continue to move from traditional pay TV to streaming.

But the new parent's leadership wants to "use CNN programming to bolster a larger streaming bundle that will combine the best of WarnerMedia and Discovery," according to CNBC. which reports that Licht has been working behind the scenes with other Warner Bros. Discovery execs for several weeks to pin down a streaming strategy for CNN.

CNN originally budgeted about $1 billion to build out CNN+ and realize a profit after four years, and has already spent about $300 million, including on talent and marketing.

CNN+ staff will “continue to be paid and receive benefits for the next 90 days to explore opportunities at CNN, CNN Digital and elsewhere in the Warner Bros. Discovery family," Licht said in an internal memo. "At the end of that period, any departing CNN+ employee will receive a minimum of six-month severance (depending on length of service at CNN).”

No word yet as to how Warner Bros. Discovery is addressing what would seem to be a significant career twist for big-name news talent who were recruited for CNN+, including former Fox News host Chris Wallace, former MSNBC host Kasie Hunt and NPR star Audie Cornish.

Some of the "new" talent may assume roles on CNN’s linear station, but those decisions will be made in coming weeks by Licht, according to  CNBC sources.

CNN+ subscribers, meanwhile, will receive "prorated refunds," according to the company.