'The Chosen' Chooses To Divert With Devilish Campaign

The devil made them do it.

You may never have heard of “The Chosen,” one of streaming’s most-viewed drama series. Chronicling the life of Jesus, it runs for free over its own app, and has garnered a reported 350 million views for 16 episodes over the first two of its planned seven seasons. Season one is also available to subscribers of Amazon Prime, Peacock and other services.

A month before Easter, the Harmon Brothers agency placed 70 outdoor billboards in four versions nationwide suggesting that people watch “The Chosen.” Copy included such lines as “Binge Jesus” and “Come and See.” 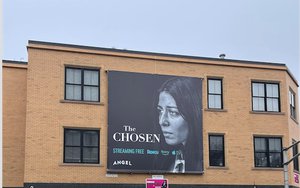 Then, about a week before Easter, 48 of the billboards were suddenly defaced with graffiti, resulting in such sacrileges as “Binge Jesus” being replaced by “Binge Kale (eww)” and “Come and See” becoming “Come and See Poopy Butts.” Character images on the four boards were also altered in negative ways.

Graffiti on all the defaced boards also declared ChosenSux.com, which when visited redirected users to TheChosenIsNotGood.com, a site featuring a nearly five-minute video titled "Don’t Watch the Chosen," plus links to social media pages, where “Satan” took credit for the defaced billboards, and even a playable parody of “Space Invaders” featuring characters from the show.

But those who clicked on other links like “Don’t click to watch The Chosen free’ and “Don’t download the free Chosen app,” were actually taken to a page where they could watch the series or download the app.

Turns out that all the graffiti-strewn billboards -- and also the evil website -- were part of a coordinated marketing campaign from “The Chosen” and Harmon Brothers. 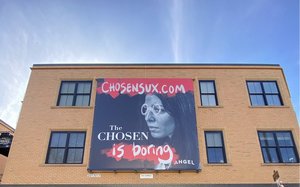 That revelation, though, came too late to head off a backlash by loyal faith-based viewers who felt duped into thinking the defaced billboards were the work of a hate group targeting them, reported ChurchLeaders.

“I do regret not informing and including our core fans in our defacing gag, because that caused some unintended confusion and disappointment,” apologized “The Chosen” creator/director/co-writer Dallas Jenkins in a press release. “But moving forward, we’re extremely excited about this campaign and are already seeing new audiences who previously weren’t interested in the show.”

Indeed, “The Chosen” has no intention of ending its devilish campaign.

“The driving idea is that the devil character wants to stop people from watching ‘The Chosen,’ but his methods aren’t working, so he decides to become an influencer,” Jeremiah Smith, vice president of creative for “The Chosen,” explained to Marketing Daily. “That’s really where the campaign takes off — and continues to backfire as new viewers keep tuning in.”

On Instagram and TikTok, Smith said, “you can find him [the devil] poking fun at actors, artists, and pretty much anyone who likes the show. He’s already commented hundreds of times on ‘Chosen’ posts, fan posts, actor’s profiles, and engaged with fans in our livestream.”

Most of the billboards will remain up through mid-May, Smith said, and “we’ll continue this organic strategy throughout the year while also expanding our advertising, including a disruptive IMDb and Rotten Tomatoes takeover starting the weekend of April 22.”

Jeff Harmon, co-founder of both Harmon Brothers and Angel Studios, which produces “The Chosen,” also doubled-down on the campaign. “Allstate has Mayhem and Chick-Fil-A has cows,” he said in a statement.” It would only make sense for The Chosen to have, well… a devil. We hope people enjoy the humor and effectiveness this modern Screwtape-type campaign offers.”