All The News That's Fit To Be Fungible 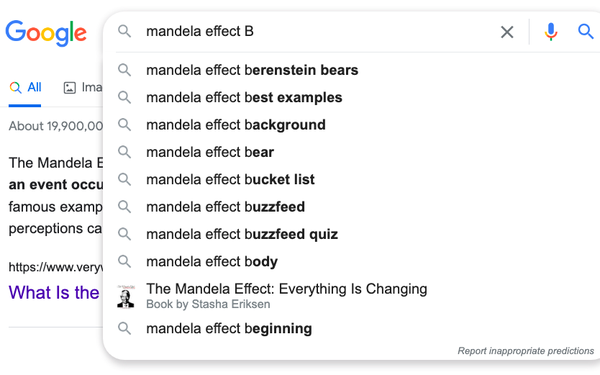 “Interesting that they've started up CERN's Large Hadron Collider again. Because I hadn't had a Mandela effect hit me for at least a half dozen years,” my friend Tom Siebert wrote in an email to me the other day, making me think about something that I haven’t thought about in a while: the increasingly fungible nature of reality in a world of real-time digital media, where facts can be updated on-the-fly.

It was nice to hear from Tom, a former MediaPoster, trade reporter, media critic and PR executive who has consistently challenged my own memory and perceptions of reality.

Tom was the first person to introduce me to the concept of the Mandela Effect, which is the concept of a mass misremembering of historical facts. It’s called the Mandela Effect because a significant number of people falsely remember South African leader Nelson Mandela dying in prison during the 1980s, not in 2013, when he actually died after serving as South Africa’s president.

One of the most famous and widely circulated Mandela effects is that a significant number of people remember the name of the children’s book series “The Berenstain Bears” as being spelled “Berenstein.”

Most people attribute the incongruities simply to false memories, but some people think it’s more fundamental than that, and that reality has actually changed due to some paranormal phenomenon, like a fracture in the space-time continuum.

Hence Tom’s quip about CERN’s collider, which some people have speculated could do something like that.

I replied that I didn’t actually remember the date of the original Earth Day in 1970, but sent him digitally archived images of old posters from that era showing its date as April 22, not April 20.

But if you believe Mandela Effects are real-world phenomenon, that isn’t any proof, because those people believe either reality has literally been altered, or even stranger, some massive conspiracy is taking place that has physically altered analog media representing historical facts: like a poster representing the actual date of the original Earth Day.

I haven’t written about this since 2017, right after the last president of the United States took office, and Tom first explained the Mandela Effect to me.

I used it to write a column coining the term “The Trumpela Effect,” and have been tracking it ever since to see if it ever gained steam.

Thankfully, it has not. As of this morning, Google indexes only seven references to it, including the one published by me, as well as several blog posts, including one cleverly referring to me as “Joe Mandalese.”

Aside from the nice part about hearing from Tom, the other reason I’m writing about this today is that I coincidentally also received an academic research study analyzing how often The New York Times alters the headlines of the articles it publishes digitally.

The study, which was conducted by professors at Wake Forest University using data from news bias tracking startup Ground News’ “Blindspotter” tool, found that The New York Times’ editors changed the headlines of 14% of the stories on their home page relatively immediately, while 6% of them are part of alternate headlines published as part of so-called “A/B” tests to determine which ones are better.

While I don’t think anyone will find it surprising that big news publishers like the Times routinely alter their headlines, or that they test them to see which ones generate higher readership, I’ve always found that practice dangerous in terms of people’s perceptions of reality, because different people are literally perceiving different versions of the reality of news from a publication that many believe to be a “newspaper of record.”

It’s also one of the reasons MediaPost resists changing the headlines or any factual aspects of the articles we publish, which is a practice some sources have said is antiquated.

I take that as a compliment, because antiques -- like factual records -- are things that stand the test of time. And I attribute at least some of the Mandela effects, or even simple debates about the factual authenticity of some news reporting, to the fact that digital news media alter their content so much and so often that there no longer is an indelible record for people to rely on.

News media aren't alone in this digital reality-bending phenomenon. Google, whose self-described mission is to "organize the world's information and make it universally accessible and useful," is guilty too. When I began a search query to fact-check part of this column, I started typing "mandela effect B..." and Google's first autofill option was "Berenstein Bears."