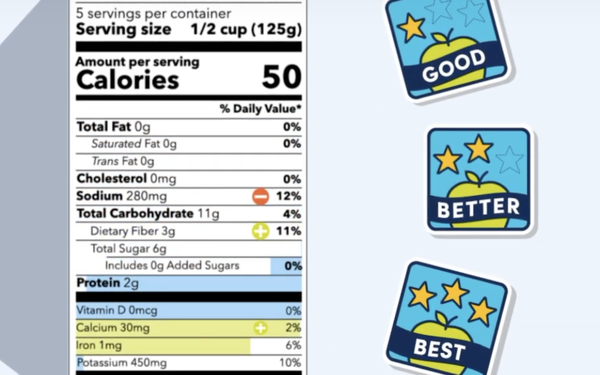 While most people recognize fruits and vegetables as healthy choices, the CPG-laden “center store”­—the area in a supermarket full of packaged foods—is where perceptions of nutritious food can get fuzzy.

Greene was working for the Maine-based Hannaford supermarket chain when its parent company launched Guiding Stars in 2006.

The Guiding Stars science-based, point-scoring system uses algorithms to analyze nutrition labels based on Dietary Guidelines for Americans, which the U.S. Departments of Agriculture and Health and Human Services update every five years.

Guiding Stars can be accessed through an app and is seen on products and shelf tags in more than 2,000 grocery stores—the vast majority of them owned by Ahold Delhaize USA, whose holdings include Hannaford, Food Lion, Giant Food, Giant/Martin’s, Stop & Shop and Fresh Direct.

In addition, Guiding Stars is licensed by other retailers and foodservice companies.

In March, Guiding Stars’ algorithms were expanded to include no- and low-calorie beverages like water, seltzer, unsweetened teas and coffees, coconut water, kombucha and 100% juices.

The following interview with Greene is edited for brevity and clarity.

CPG FYI: What’s behind the algorithm shift for beverages?

Julie Greene: It’s something that Guiding Stars has wanted to do for a number of years. One of the reasons is, there’s such a strong connection between sugar-sweetened beverages and poor health outcomes. There’s been such great innovation on the CPG side for products with very low amounts or no calories. We wanted to focus on rewarding the products that support good health. Now retailers can start setting standards for what they put in their refrigerators, on end caps and displays.

Greene: Most people understand they should eat more fruits and vegetables. But it’s in the center of the store where you see “this product contains real fruit—or “a whole serving of vegetables.” But what else is in that product? At the end of the day, they may not know what on the nutrition facts label is the most important factor—or the total composition of a product. That’s really where we see consumers scratching their heads.

CPG FYI: How do you generate consumer awareness of Guiding Stars?

Greene: We’ve connected primarily with parents with children at home through digital channels, influencers and advertising within our retail clients’ assets—for example, weekly circulars. For Ahold legacy brands, there’s Savory magazine. GS evaluates all of the recipes in the magazine.

CPG FYI: Guiding Stars would seem to be a good differentiator for store brands because retailers decide what to put on their shelves.