The End Of Breakfast As We Know It? Tropicana's Bid To Sell More OJ 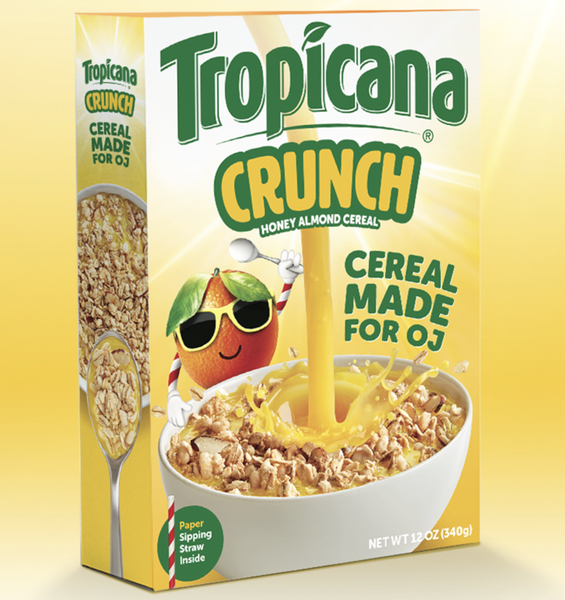 It’s not often that a food marketer looks to upend more than a century of tradition, but that’s what Tropicana is up to.

The company is promoting Tropicana Crunch, a honey almond cereal that it wants people to drink with orange juice. The item is hitting stores on May 4, which is not only Star Wars Day, but U.S. National Orange Juice Day.

Tropicana promotes the cereal as “an unforgettable breakfast experience.” A reviewer at PopSugar notes that it works pretty well. “When I took my first bite, I was wowed by the strong, tangy citrus flavor; it was almost overpowering but in a good way,” the reviewer notes, adding that “I didn’t hate it like I thought I would.” She goes on to praise Tropicana for including a red-and-white-striped paper straw to let breakfast eaters sip extra O.J.

The New York Times recently delved into the history of cereal and noted that James Caleb Jackson, a man who ran a medical sanitarium in western New York, created a breakfast cereal from graham flour dough that was dried and broken into shapes so hard they needed to be soaked in milk overnight.

John Harvey Kellogg later built on the idea and created granola. It wasn’t until the early 1900s that Kellogg and his younger brother, Will Keith Kellogg, figured out how to make a flaked cereal called Corn Flakes. It seems the early cereals were tough, and milk was used to soften them up.

In 2016, BuzzFeed tried pairing cereal with other liquids, including orange juice. “The sweetness of the Froot Loops combined with the tartness of OJ was a fairly tasty combo,” noted one reviewer. Despite that, one fifth of Americans already use orange juice in their cereal instead of milk, according to a 2015 survey from Kellogg. Ten percent of people put coffee in their cereal, according to the same survey.