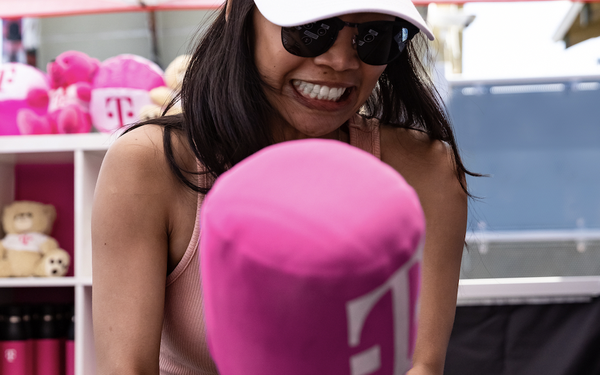 As the anti-corporate rock group Rage Against the Machine plans its first tour in more than a decade for this summer, T-Mobile has announced a similar-sounding “Rage Against Big Internet” tour. In this case, the targets are such internet service providers as Comcast, Charter, Cox, Verizon Fios and AT&T.

News of the year-long, nationwide T-Mobile tour comes a week after T-Mobile unveiled “Internet Freedom,” a campaign touting its broadband service as better than the major industry players.

While exact details of “Rage Against Big Internet” remain secretive, T-Mobile promises “a series of wacky pop-ups” that will provide “an outlet for frustrated Big Internet customers to let out their angst.”

The experience was designed as “part therapy, part game,” said T-Mobile, which provided Marketing Daily with sample frustrations voiced at the event by customers of traditional ISPs:

“Whack an Internet Provider” works like this: Players take a Magenta T-Mobile mallet, “wait for a maddening Big Internet policy to pop out of its hole, and then BOP that sucker,” the company said in a statement. “Repeat again and again until you feel the negative emotions escape your mind, body and soul.”

“We are here to expose the egregious ways our peers treat their customers and do something about it,” stated Mike Katz, chief marketing officer, T-Mobile. “Big Internet’s been coasting for far too long without a counterbalance. Those days are over. The Un-carrier is coming for you.”

Available to 40 million homes covered by its 5G network, T-Mobile’s Internet Freedom features a “forever” broadband price of $50/month or $30/month for consumers who add internet service as another line on a T-Mobile family wireless plan; a 15-day free trial, with no need to get rid of the consumer’s current ISP; and payment of up to $500 in early termination fees if the consumer decides to switch to its plan.