Kimmel's Annual Upfront Roast Of His Own Company: Pro Or Con? 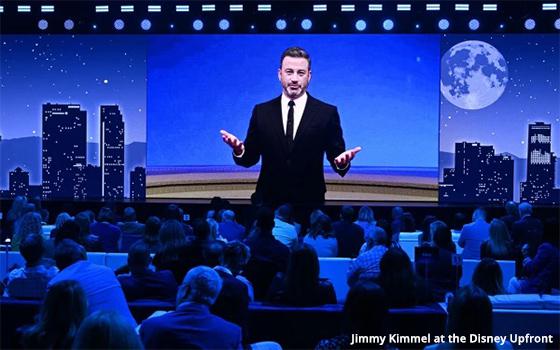 On the one hand, Jimmy Kimmel’s annual appearance at the Disney Upfront in which he delivers a take-no-prisoners roast of his own company is funny and entertaining.

Judging by the enthusiastic reaction of the Disney Upfront audience year after year, it is by all appearances well-received too -- at least on the surface.

On the other hand, Kimmel’s monologue can be so savage -- in reference to both his own company and the advertising industry in general -- that you wonder if his cutting remarks have the power to undermine the potency and the supposed seriousness of the message that Disney is trying to get across to its ad-industry partners at these annual sales presentations.

As noted in another TV Blog earlier this week, the sales message one might have expected at the Disney Upfront in Manhattan Tuesday evening was largely missing in action anyway.

It was replaced by two hours of noisy, chest-thumping hype about upcoming shows and movies headed for various Disney platforms.

In this context, it is reasonable to ask: If there really was no selling message or selling effort at the Disney Upfront, then technically what was there for Kimmel’s scorched-earth monologue to undermine in the first place?

The answer might be: Whether or not Disney actually made an effort at its Upfront to put across a concrete sales pitch, it is a certainty that the company will make plenty of them as the Upfront sales season gets under way.

But every year, Kimmel’s monologue would seem to fly in the face of the arduous sales effort his company is about to embark on when he delivers his observations and one-liners dismissing the whole TV network-advertiser sales process as straight-up BS.

For openers, it is not lost on the TV Blog that no other TV company does this during Upfront presentation season.

This can be interpreted as evidence that every other company believes more strongly than Disney that having one of their top comedians excoriate the advertising sales process on the eve of this crucial sales season is, at the very least, counter-productive.

This year, Kimmel let fly from the very get-go of his 14-minute monologue when he thanked Disney sales chief Rita Ferro for introducing him, and then referred to her as “the queen of b------t.”

Examples of his own company’s BS flew out of Kimmel’s mouth. “ABC … you know, we finished the year in last place in total viewers and in the demo and yet somehow we are the No. 1 entertainment network for the third year in a row! How is that possible?” he asked. “I’ll let you in on a little secret, it isn’t!”

Soon thereafter, he referred to his ad-biz audience as “scumbags” in a bit about Netflix. Noting that Netflix subscribership has slowed recently, Kimmel noted the company’s newfound interest in advertising.

“Now they’re coming for our money, our ad money, which is technically your money, but you know what I mean,” Kimmel said. “And it sucks, though I have to admit [that] after those smug bastards choked the life out of us for years, it feels really good to see them stoop to selling advertising -- having to call on you scumbags, take you for drinks, kiss your ass!”

It is also true that when he wasn’t cutting down his own company and their ad sales with a buzz saw, he took razor-sharp aim at the competition -- taking down the Upfronts held a day earlier by NBCUniversal and Fox, and looking ahead derisively to CBS’s Upfront scheduled to be held the next day.

And to return to one of the points made above -- one of the “pro” ones -- his monologue, appreciate it or not, is a high-quality piece of comedy. It is very well-written, and nothing if not timely, with some of it obviously written as recently as the same day it is delivered.

And if having a comedian like Kimmel come on every year to tear down the industry is such a great thing to do, then why don’t any other TV companies do it?