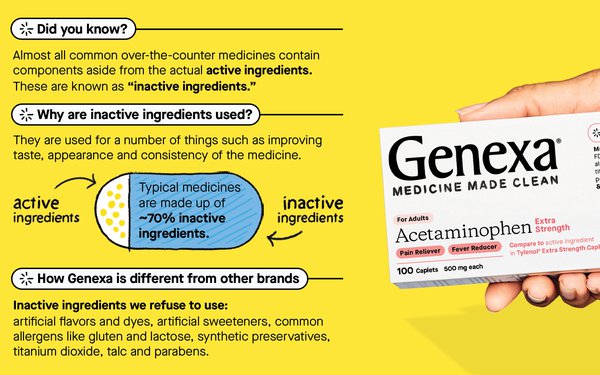 Genexa, which bills itself as the “first clean medicine company,” is directly taking on Johnson & Johnson’s Tylenol and Tylenol PM with two acetaminophen products that don’t contain artificial inactive ingredients like dyes and synthetic fillers.

“We’re bringing options to people’s medicine cabinets they have never had before because we believe that it's time to evolve the decades-old formulas in our everyday medicines without compromising on efficacy,” Genexa chief executive officer and co-founder David Johnson (no relation to Johnson & Johnson) said in a statement.

Founded in 2014, Genexa  already offered an extensive line of clean OTC products and is best known for its kids’ medicines. It’s the parents and pediatricians who love those products who “reached out to us and asked us to make an adult clean medicine option,” Culp said.

Culp says the celebs are involved in Genexa’s marketing efforts as well, “from sharing wonderful news to their audiences, to brainstorming innovative in-store activations, to aligning on charitable partnerships… Unlike typical paid endorsement deals…our celebrities have personally invested their own funds because they are passionate about providing people with clean medicine options and the movement we’ve sparked.”

In June, meanwhile, Walmart shoppers will encounter off-shelf displays featuring the new acetaminophen products as well as “our top kids’ best sellers,” Culp revealed. “These activations not only highlight our product line but also help illustrate what makes Genexa different, with a QR code leading to a branded landing page on Walmart.com.”