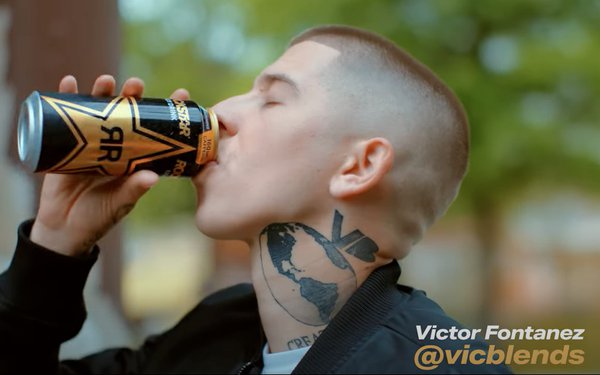 PepsiCo’s Rockstar Energy and Cheetos brands are extending their outreach to Hispanics and the Latin community.

Fronting what Rockstar calls its “first-ever Hispanic equity campaign” is North Carolina native Victor Fontanez—known to millions of TikTok followers as Vic Blends—who cut peoples’ hair as a youngster before becoming a part of the Atlanta rap music scene.

Blends makes his Rockstar debut in a spot from the Alma agency kicking off the “Poder Para Mic Gente” (Power For My People) campaign designed to spotlight a new generation of Hispanic “hustlers,” according to PepsiCo general manager and energy category CMO Fabiola Torres.

Among other ways of giving back to local communities, Blends’ philanthropic efforts include launching the Vic Blends Academy, an online curriculum for barbering techniques and success advice.

While Rockstar has teamed with Hispanic notables like female rap star Snow Tha Product, this is a broader marketing effort.

“Vic has a great story and we were inspired by how he gives back to the community continually through his philanthropic efforts both in Atlanta and beyond,” Torres tells Marketing Daily.

“This is our first integrated campaign that will run on multiple platforms that reach Hispanic consumers,” who are 28% more likely than the general U.S. population to consume energy drinks.

Although not shown in the commercial with Blends, Rockstar is launching two new fruit flavored variations under the Punched Aguas Frescas name.

In this spot from the Dieste agency, Bad Bunny munches on Cheetos while leaving a dusty orange trail in the Boyle Heights neighborhood of Los Angeles to the tune of “Party.” from his latest album.