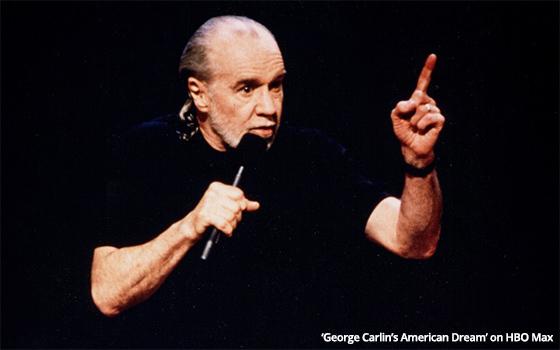 For those of us of a certain age, documentaries about entertainment personalities who are no longer with us generate feelings of nostalgia for the bygone decades of our lives.

For younger people, the same documentaries open windows on a world they can only vaguely imagine.

Such is the case with the new two-part documentary about the life and career of George Carlin that premiered on HBO last Friday and started streaming the same day on HBO Max.

Its length is a godsend -- approximately three hours and 40 minutes, give or take -- allowing for a motherlode of vintage clips of Carlin on stage, at home and in TV interviews.

The directors have done a very diligent job putting together this engrossing film from all of the raw material they managed to assemble.

It does indeed add up to a very comprehensive telling of the Carlin story, from his hardscrabble childhood in Morningside Heights and his struggles to make ends meet at the outset of his career in the early 1960s to his subsequent fame as a sought-after, headlining comedian who frequently guest-hosted and performed on Johnny Carson’s “Tonight Show.”

To which younger people might ask, “Who’s Johnny Carson?” Well, he was a guy who hosted “The Tonight Show” on NBC for 30 years. He was hugely successful in an era when America watched only three TV networks.

“What?” They might ask incredulously. “Only three networks? You’re kidding, right?” You get the point.

For the millions who were not yet born when Carson called it quits in 1992, people such as he and George Carlin are historical figures on par with Thomas Edison or Franklin Roosevelt.

Thus, young people will get a lot out of “George Carlin’s American Dream” precisely because it succeeds in bringing this entertainer and his era vividly to life.

For older viewers who enjoy revisiting the good ol’ days every once in a while (because all “ol’ days” are good, right?), this documentary is just as vivid.

Documentaries such as this one have an understandable tendency to frame their subjects within the tumult of the times in which they lived.

With hindsight (whether 20/20 or not), conclusions about a historical subject’s position in the greater zeitgeist of his or her times are inevitable and wholly legitimate.

At such times, however, I wonder if these documentary subjects ever thought about their influence or their historical legacies while they were in the midst of living their lives.

On this subject, I am reminded of an anecdote the late Joe Franklin* once told me about Charlie Chaplin, who Joe interviewed on a radio show somewhat late in Chaplin’s life (or so said Joe).

“I had Charlie Chaplin once on my radio show and I asked him, ‘Mr. Chaplin, what about all these people who sit frame-by-frame analyzing your movies and they find all the Freudian implications, all the shadings, like every time [the little tramp character] kicks the fat man’s behind, he’s supposed to be knocking the establishment and they go on and on ... ?’ ” Joe said in the unique, merry style that was his alone.

“You know what?” Joe said. “He swore to me that he had nothing in mind when he made those movies except to make people laugh!”

*Helpful note to younger people: Joe Franklin (1926 to 2015) was a talk-show host who interviewed the notable and not-so-notable on New York radio and TV for 50 years.