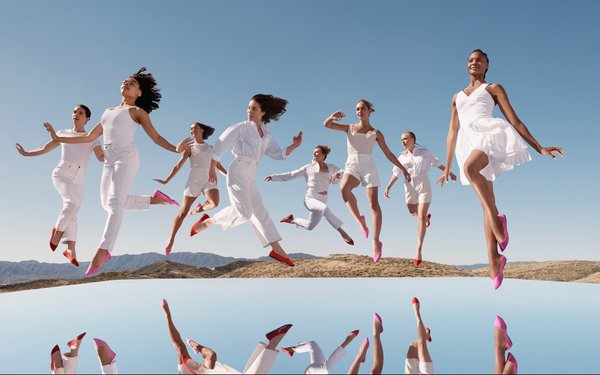 Rothy’s, the comfy sustainable flats seen on so many chic feet, is introducing its first-ever brand campaign. The company hopes the national push will introduce even more people to the “Ah” that comes from shoes that feel good and look cute.

Rothy’s built its fanbase via word-of-mouth and social media, fueled by photos of celebrities and the occasional princess wearing its shoes. And it’s used national product advertising before.

This campaign is different, designed to introduce more people to a brand that wants to make feet feel good.

“We decided it was time to amplify that feeling of joy people get when they slip into their first pair of Rothy’s,” says Tom Herbst, interim chief marketing officer. “It’s a feeling that comes from knowing they look great, feel great, [with shoes that] last a long time and are made responsibly. What consumers love about our shoes is that they don’t have to make any trade-offs.”

The ads, created by Yard NYC, aim to capture the bliss consumers feel the moment they slip into their first pair of Rothy’s. Themed “That’s more like it,” it shows models dressed in white as they show off multi-hued flats. In choreography that defies gravity, they float gracefully over a mirrored desert landscape.

The new effort comes on the heels of a shift in ownership. Last year, Alpargatas, the Brazilian the footwear company that owns flipflop king Havaianas, acquired a 49.9% stake in the company. That deal put Rothy’s value at $1 billion.

That cash injection has put the D2C brand into intense growth mode. It is expanding its physical presence, with stores to open in New York, Boston, Los Angeles, Chicago, Atlanta and Scottsdale, Arizona, as well as in its Bay Area headquarters. And it’s branched out to men’s shoes and handbags.

The company's also keen on partnerships. Last year, it announced a partnership with Evian, based on discarded water bottles collected at the US Open. (Evian is a sponsor.) It’s knitting those bottles into a tennis-inspired capsule collection, set to debut before this year’s tournament. The collection will include headwear and tennis bags, giving the company a chance to test new categories.

Rothy’s launched in 2012, after co-founder Roth Martin wondered why his wife, who practically lived in leggings, didn’t have a shoe that served as a footwear staple.

Its shoes are made from plastic bottles, with a 3D knitting process that reduces production waste and makes a soft, flexible shoe. The material also lends itself to a wide palette of colors and patterns, which inspires many to indulge themselves.

“Our customers say it’s even kind of like a secret handshake,” Herbst says. “When they see someone else in Rothy’s, they give each other this kind of quiet nod.”

But while the digital brand built its community through social media, Herbst tells D2C FYI t the new campaign is intended to create next-level brand awareness. “We just want to spread the joy more broadly.”

Awareness is especially important, given how many sustainable shoe brands are springing up, he notes. “We hope that we can introduce more people to the genius of the shoe itself."

Ads are running on broadcast, digital, paid social, including TikTok,  and in its stores. An out-of-home and print campaign is scheduled for later this year.