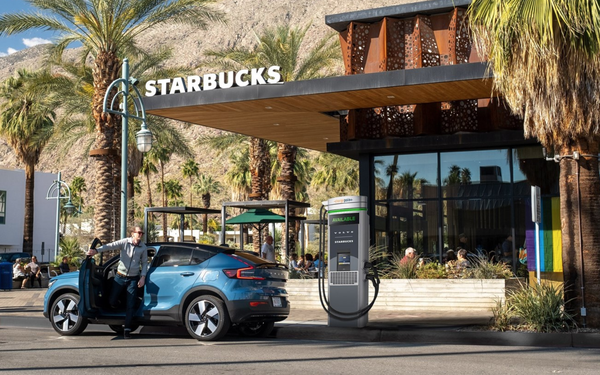 Starbucks is giving away four Volvo XC40 compact SUVs complete with a home charging unit as the grand prize in its summer sweepstakes promotion.

Now in its seventh year, this year’s iteration has a road-trip theme. Copy on the contest website includes:“Beep! Beep! Hop in—we’re taking a road trip this summer and that passenger seat is all yours.”

The digital game, which runs through June 17, is a combination of a spin-to-win game as well as a bubble-popping puzzle. Spins are earned by making an eligible purchase at participating Starbucks locations or completing challenges. Those who aren't loyalty program members can join for free with no purchase necessary.

When users “spin” the wheel at the Starbucks Summer Gamewebsite, the website reveals information about the vehicle such as “Did you know that the Volvo XC40 Recharge Pure Electric Compact SUV has front trunk storage under the hood because there is no combustion engine?”

Four players who collect all the game pieces will receive the electric vehicle along with a ChargePoint Home Flex system. The vehicle and charging unit have an estimated retail value of $84,449, making it Starbucks’ largest ever grand prize giveaway.

The automaker and the fast-casual chain announced in March plans to install up to 60 Volvo-branded EV charging stations at 15 Starbucks locations along a 1,350-mile route between Denver and Seattle.

Plans include a charging location about every 100 miles, which is within the battery range of most EVs.

ChargePoint’s DC fast chargers can bring the Volvo C40 Recharge, for example, from a 20% to a 90% charge in about 40 minutes, according to the automaker.

While all EV drivers will be able to use these stations for a fee, drivers of Volvo Cars will get the added benefit of having access to these stations at no charge or at preferential rates, per the automaker.

Installations on the route are expected to be complete by the end of 2022. Starbucks plans to continue expanding its solar pilot locations to 55 new stores this year.

Just as Volvo Cars plans to be a fully electric car company by 2030, Starbucks has said it aspires to lead the retail industry in decarbonization solutions, including EV charging and onsite solar availability at stores and in adjacent locations.