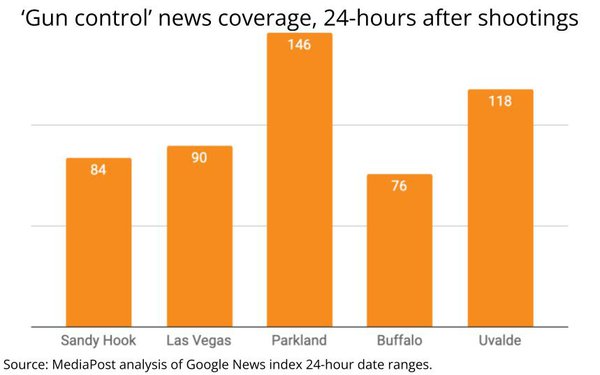 "What are we doing here?", Senator Chris Murphy demanded on the Senator floor Tuesday following the massacre of elementary school students and teachers in Uvalde, Texas.

"What are we doing here?", he repeated.

Murphy, who was the Congressman representing Connecticut's 5th district -- which included Newtown, the town where the Sandy Hook Elementary school massacre occurred -- was rightfully emotional, because nearly a decade later, our nation's lawmakers have failed to even pass the kind of gun-safety laws Connecticut has, which by the way, so far has been upheld as Constitutional by federal judges.

Connecticut's law effectively bans the kind of assault weapons used at the Sandy Hook, Parkland and Uvalde school shootings, limiting the number of rounds of ammo a gun can hold to ten -- which seems like a reasonable number to me, considering that when the Second Amendment was written, a gun could only hold one round at a time.

Banning assault weapons won't end gun violence, but it will help stop the kind of military-grade massacres weapons of war have waged in places that should otherwise be among our safest: supermarkets, concerts and other public gatherings, and public schools.

As the husband of a Connecticut public school teacher, I can relate to Senator Murphy's head-shaking, but can't imagine how parents must feel sending their children off to school each day.

Some years ago, my wife arrived at school one morning to find a shelter-in-place kit on her desk consisting of a plastic tarp and big orange bucket with no instructions about what to do with them. To quote Senator Murphy, "What are we doing?"

As a trade journalist and occasional media critic, I've weighed in on the role that media plays in debate surrounding American gun control, and in some ways, I believe media coverage does more harm than good. Thankfully, most mainstream media no longer publish or broadcast the names of shooters, which at least reduces the motivation of fame.

But on a broader note, I can't help wondering whether media coverage plays a role in desensitizing American sentiment about the debate -- because in the end, we just throw up our hands and say, "What are we doing here?"

Because the more times we replay that story, the more it wears out.

A couple of days after Sandy Hook, I published a column, "Dog Shoots Media," arguing that assault-weapon massacres were becoming so common place that news media -- and news media consumers -- were becoming inured to them, and that only "man bites dog" equivalent stories would break through.

I was right, because as Senator Murphy noted Tuesday, there are now more mass shootings in American "than there are days in the year."

And the only ones that break through are the Sandy Hooks, the Parklands and the Uvaldes. The problem is, they break out for a news cycle, go on to live as common reference points, but they end up just being media parables, not the material calls to action that they should be. The kind that will one day let Senator Murphy say, "Look what we've done here," after passing legislation that makes America a safer place.

"We have become numb to stats," Dentsu's Brian Monahan writes in a column we are republishing here today. He originally wrote it in response to the recent New York City subway shooting, but as the numbing stats show, it could be written on any day in America and still be relevant.

In case you didn't get all the way through it the first time we published it, Monahan's column is an explicit call-to-action. He's asking industry colleagues -- people like you -- to join him and the founders of the Gun Safety Alliance to do more than ask what we're doing here and actually do something about it.