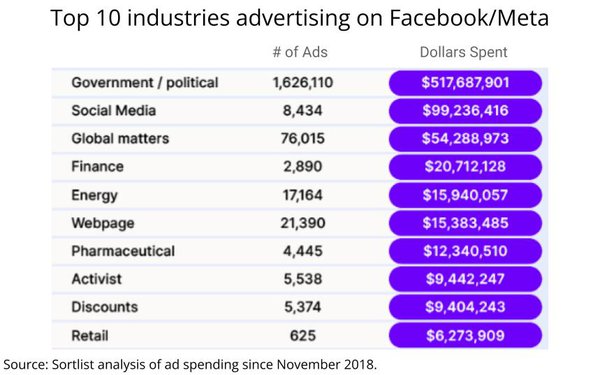 If you guessed government/politics, you’re way ahead of me. And you probably also have some strong opinions about how that correlates to parent Meta’s decisions – or indecisions – about regulating organic political content.

While it doesn’t speak to the latter, a new study published by advertising services directory platform Sortlist reveals the category spent more than half a billion dollars on the social network, which it says is more than any other U.S. industry.

(Ironically, the No. 2 U.S. ad category advertising on the social network was “social media,” revealing that in some ways, it functions very much like an old school medium like television [ie. cross-channel promotion]. But that’s another story.)

But the No. 3 U.S. ad category – “global matters” – does relate explicitly to political, because it is comprised of advocacy advertising from groups like the American Civil Liberties Union, Sandy Hook Promise, etc.