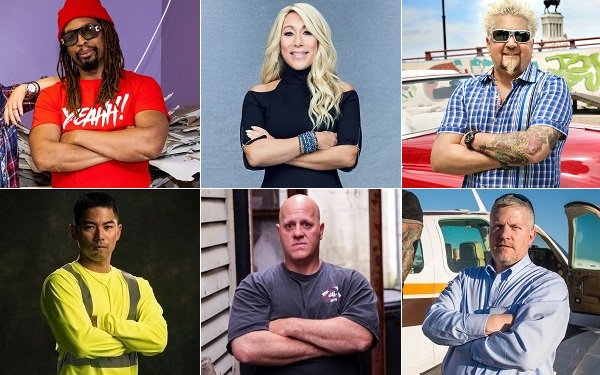 Right up there with the “pointed finger” sitcom photo that is a favorite of TV publicity departments everywhere is the "crossed arms" photo in which evidently self-confident TV personalities pose with arms crossed.

The TV Blog noted the pointed-finger phenomenon in a column a little more than a year ago. Now the crossed-arm photo is in the TV Blog's crosshairs.

Last year's column hypothesized that the pointed-finger photos, in which one sitcom character is playfully aiming an index finger at another, are included in the troves of pictures publicists make available to journalists because they are meant to convey the comedic and lighthearted nature of the sitcoms that are promoting.

But what of the crossed-arms photos that a journalist encounters time and time again on the proprietary web sites where the publicists post such “assets” for our use? What do they convey?

The six photos above are typical. In the top row, Lori Greiner of ABC's “Shark Tank” and Guy Fieri (right) of Food Network's “Diners, Drive-Ins and Dives” are all smiles as they cross their arms. And why shouldn't they be smiling? They have both been enriched by shows that have run for years.

On the left is rapper turned-TV renovation-show personality Lil Jon. He seems more circumspect than the other two, maybe because his new show on HGTV -- “Lil Jon Wants To Do What?” -- just started May 2, and has yet to prove itself in the manner of “Shark Tank” and “Triple D.” Perhaps Lil Jon's fingers are also crossed.

By contrast, the three on the bottom row are all business. Along with their grim, “game face” expressions, their folded arms give off an aura of seriousness with a hint of defiance.

On the left, “Tough As Nails" contestant Takeru Tanabe looks ready for battle. The other two strike serious “arms crossed” poses for other reasons.

In the center, “Joe” (first name only) of the Discovery series “Saint Hoods,” about Boston hoodlums, seems ready for action of a different sort.

Body-language experts who likely have had little or no experience with TV publicity photos nevertheless have a lot to say about the meaning of crossed arms.

"'Crossed arms' is perhaps the most common body language gesture that we come across in our day-to-day lives,” says an article on the website Psychmechanics.com. “Crossing arms across the chest is a classic gesture of defensiveness. This defensiveness usually manifests as discomfort, uneasiness, shyness or insecurity.”

This may or may not apply to TV personalities who rarely present as shy or insecure in their public lives, TV shows or publicity photos (even if they feel these things privately).

Other online sources disagree. “I hear it all the time,” writes former FBI behavior analyst Joe Navarro on PsychologyToday.com. “If you cross your arms, you are blocking others out and sending a negative message. I'm sure you have also heard this. But is it accurate?

“Let me inform you now that it is not,” he writes. “It is a simplistic misconception, similar to other myths, such as the idea that if you look away, you are lying.”

Do these analyses from the community of behavioral and body language experts apply to the many arms-crossed photos in the TV industry’s picture troves?

I doubt it. The TV personalities in the publicity pictures probably had no say in it. They were likely directed to do it by someone else, then they did it, and then they went to lunch.
celebrity, public relations, television
Next story loading