Americans Spend More On Gaming Than Streaming -- Or Health And Fitness 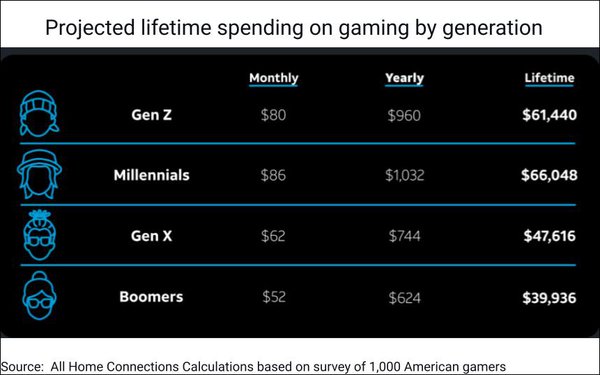 Just how hooked are Americans on gaming?

The average American gamer spends about $76 each month on gaming, including internet services, in-app purchases, new games and gaming equipment, according to a Pollfish survey of 1,000 gamers ages 16 through 65 by All Home Connections, an AT&T authorized sales agent.

In comparison, recent data shows Americans spending about $564 per year on average for streaming service subscriptions.

Gamers also report spending about 20% more on gaming than travel.

Millennials spend the most on gaming: about $86 per month on average, with 41.6% reporting they spend between $91 and $150 each month.

Gen Z is close behind, at $80 per month, while Gen Xers and boomers spend the least: $62 and $52 per month on average, respectively.

Although it’s probably unlikely to change the behaviors of devoted gamers, the survey team also calculated how their reported gaming spending levels would add up over an average lifetime -- more than $66,000 for the millennials, on average (chart top of page) -- and how much each generation could have saved if they’d invested the money spent on gaming between age 16 and 65 (6% return assumed): 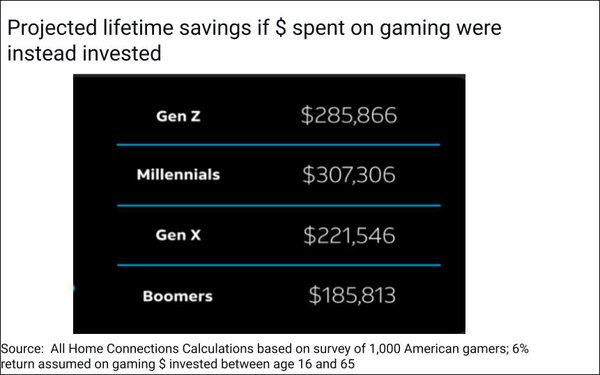 While this is all fairly speculative, the premise gives one pause, no?

gaming, mobile, spending
1 comment about "Americans Spend More On Gaming Than Streaming -- Or Health And Fitness".
Check to receive email when comments are posted.
Next story loading