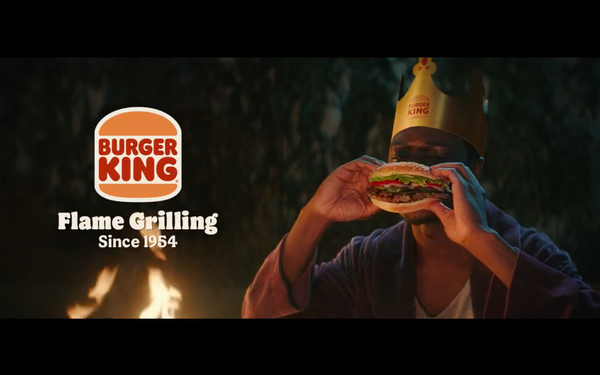 Burger King UK's new campaign, "Whopper To A Flame," is on a mission — to find a grill.

In new spots by BBH London, burgers fly through the air in search of flames. That means ignoring the human drama — broken harts, partying friends and stranded mountain hikers — in its path.
The campaign will roll out over the summer on television and VOD, with additional out-of-home support and further Whopper-celebrating activity planned for later in the year.
Flame-grilling is what makes Burger King’s Whopper distinct – and like a moth to a flame, the Whopper patty magically finds its destination.

In one spot, a sad lover tearfully burns the matching sweaters he and his ex worn in a photo. As the fire engulfs the clothing, a burger, resembling a flying saucer, zips through his yard to find its steaming home.

Another spot shows the burger crash a party around a fire pit. Later in the year, the third spot will feature lost hikers huddled for warmth by a fireplace in a mountain cabin. Their stillness interrupted by the Whopper.
Felipe Serradourada Guimaraes, deputy executive creative director at BBH, said: “These spots are deliciously weird and wonderful. I don’t think many people expect a floating burger to knock at their door but, then again, the Whopper is not just any burger.”
ad campaign, fast food
Next story loading