Tums Makeover: Antacid No Longer Fights Food, But Loves It 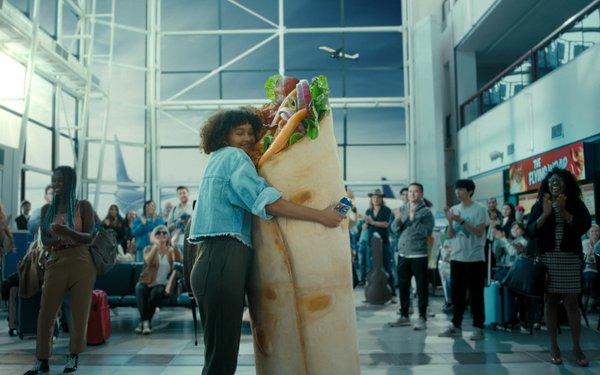 Tums is now a lover, not a fighter.

After more than a decade staging various food fights to “fight back fast” against heartburn, the 92-year-old OTC antacid from GlaxoSmithKline now declares “It’s Time to Love Food Back” in the first salvo of a brand identity and campaign.

The new :15 spot, in which a woman shares a loving embrace with a giant spicy chicken wrap before departing from an airport, is a far cry from such past ads as a face-off between mozzarella sticks in a boxing match or a man grappling with bacon in the backseat of a car.

Grey, which has worked previously on the food fight ads, continues as Tums’ agency.

Something else that hasn’t changed: the familiar Tums audio logo, which dates back to this 1981 commercial: “Tum-ta-tum-tum-tums!”

“Our insights show the love people have for food is very real, making the transition to now embrace those positive feelings with a refreshed identity as essential to our mission,” stated Amy Sharon, Tums brand director.  In addition to the ad creative, Sharon said the brand is “also calling on our fans to join in on the fun and show off their admiration for the foods they can’t – and don’t have to – live without.”

One way for consumers to do that is by showing up on the “Tums Cam,” part of an in-stadium Screenvision Jumbotron ad buy that’s launched in the St. Louis Cardinals’ Busch Stadium until the end of baseball season and will also run in New York Mets’ Citi Field for four weeks.  Akin to the popular ballpark “kiss cams,” the camera spotlights baseball fans willing to spend a passionate moment enjoying stadium food.

The brand says it’s also bringing the Tums Cam to select food festivals this summer, where it will partner with local food trucks to create “TUMSworthy” meals for tasting, along with giveaways of brand samples and swag.

Consumers can also create their own Tums Cam videos or photos at home, and then submit the entry to enter a combined sweepstakes/contest. One sweepstakes grand prize winner will get an all-expenses-paid trip for two valued at around $13,000 to three top U.S. foodie destinations (two nights in each) from a list that includes New York, Chicago, San Francisco, New Orleans, Los Angeles and Seattle.

Ten contest winners, whose entries will be judged based on image framing, food connection and “appetizing” appeal will receive Tums samples and branded swag valued at $44.75.

Some entrants will be chosen to have their photos or videos featured in Tums Cam footage that will run in minor league ballparks and the big-league stadiums.

The Tums Cam segments can last up to 90 seconds.

How big is the potential Tums audience?

Irregular dietary habits, along with such other “poor lifestyle choices” as deskbound jobs and poor sleep quality, are leading drivers for antacid sales, according to The Business Research Company, which reported recently that the global market would grow from $8.60 billion in 2021 to $9.13 billion in 2022, an increase of 6.1%

Those poor lifestyle choices can in turn lead to gastroesophageal reflux disease, currently suffered by 60 million Americans according to the American College of Gastroenterology, which further drives the demand for antacids.

Besides Tums, other leading players in this lucrative field include Maalox, Mylanta, Rolaids, Procter & Gamble’s Pepto-Bismol and the combo antacid/aspirin Alka-Seltzer.