How Apple Kickstarted The New Golden Age Of Consumer Targeting

In the aftermath of Apple’s new privacy framework, as well as Google’s deprecation of cookies, I wrote about how it could be the best thing that ever happened to advertisers – for two reasons. One is that it forces them to shift away from the potentially costly liability of targeting people based on their identity. The other is because I believed it would set off a new Golden Age of targeting innovation, and based on two new approaches I got briefed on today, I think the latter is definitely taking root.

One was Dentsu Media’s announcement today about a new tool dubbed “Contextual Intelligence,” which has been rolled out across its media services units – Carat, Dentsu X and iPropsect – and uses the sciences of proprietary algorithms, natural language processing, and sentiment analysis to create audience targeting segments that work as well, if not better, than the kind that were based on identity trackers (which, let’s be honest, in many cases weren’t very good anyway).

As you might expect, the product is proprietary, so Dentsu isn’t letting anyone take a look under the hood, but it did provide results of a pilot campaign for Pandora (the jewelry retailer, not the music streaming service), which happens to be a Carat client.

The pilot, which ran around one of Pandora’s peak selling seasons – Valentine’s Day – increased the retailer’s return on ad spending “24x” vs “the next best tactic.” Which I imagine was either decaying identity-based data, or none at all, but objectively, still pretty good when you consider that ads placed using the contextual targeting approach “drove 36%” of Pandora's sales using “only 2% of campaign spend.”

Embracing contextual targeting in the wake of Apple’s privacy framework is not new. Other big agencies – most notably GroupM’s Wavemaker, which has effectively been pushing its clients to move 100% in that direction – have been praising it as a solution. But it’s nice to see big agencies productizing it and creating some proprietary IP around it too (see the nifty infographic Dentsu created for its version below). 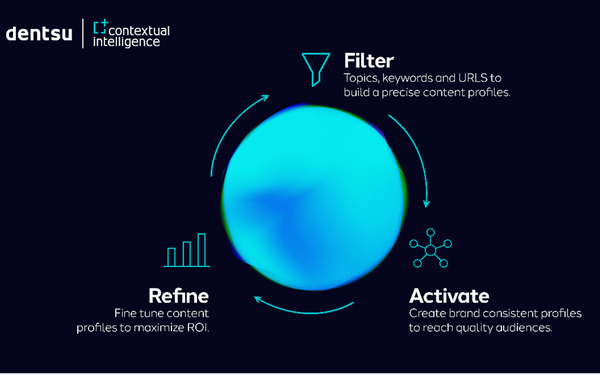 The other brief I got, was in a completely different direction, but no less innovative, and from what I can tell, just as or maybe even more effective. It’s a new product from MediaPost’s independent media agency of the year for the past two years, USIM, and it builds on its proprietary PurView consumer targeting product, which used opted-in consumer mobile location data to help retail clients understand customer movement based on their unique trading areas.

The new product, dubbed uView (I’m told the “u" stands for USIM), is a tool developed from the agency’s partnership with giant U.S. credit bureau TransUnion. While it’s not new for agencies or their clients to work with TransUnion data, USIM’s approach is both unique and innovative, effectively using it to match its clients' own first-party databases – the ones it acquires directly from its own customers – to anonymized consumer data from TransUnion’s empirical consumer data, enabling USIM clients not just to build new customer targeting segments and/or extend them via lookalike targeting, but to learn how they relate to customer segments the brand may not otherwise ever have been able to see.

As USIM Executive Vice President-Insights and Analytics Rob Jayson explained to me during a briefing this morning, a quick-service-restaurant client might have great customer data on how often people eat and what they eat at their restaurants, but the TransUnion data now enables the company to see a much broader picture of its customers, including things like how often they travel by air, purchase products unrelated to QSR, or even what their creditworthiness is.

Those attributes aren’t just important for targeting people through media, but to understand exactly what "messaging” to deliver to them in those places.

Think of it as a “clean room” for tapping into a holistic view of who your customers actually are, not just the parts of their consumer lifecycles you actually touch.

Jayson says the product is still in early development, but it’s already showing promising results, including big brand and sales lift. It also can be used to effectively target a consumer segment many brand marketers simply give up on: lapsed customers.

“Our clients never know what happens once a customer doesn’t answer another email,” Jayson explains, adding that by tapping into the uView data, they know not only where to reach this segment, but how and with what message may best bring them back as customers.