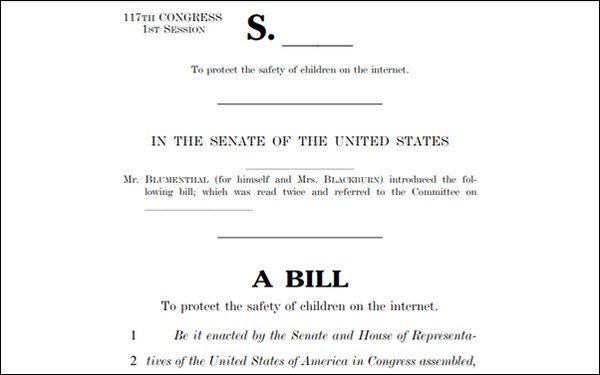 More than 100 organizations are urging lawmakers to move forward with a bill that would impose sweeping restrictions on how online apps and services display material to users under 16.

“The evidence is abundantly clear of the potential severe impacts social media platforms can have on the brain development and mental health of our nation’s youth including, hazardous substance use, eating disorders, and self-harm,” Fairplay, the American Academy of Pediatrics, Consumer Federation of America and dozens of other groups say in a letter dated Tuesday to Senators Maria Cantwell (D-Washington) and Roger Wicker (R-Mississippi), who head the Senate Commerce Committee.

The groups are asking the lawmakers to mark up the Kids Online Safety Act, introduced in February of 2022 by Senators Richard Blumenthal (D-Connecticut) and Marsha Blackburn (R-Tennessee), which would require companies to act in the best interest of users under the age of 16.

Among other mandates, the measure would require online companies to prevent “promotion of self-harm, suicide, eating disorders, substance abuse, and other matters that pose a risk to physical and mental health of a minor."

The bill would also require companies to give parents of users under 16, as well as those users, new tools to filter content and to opt out of recommendation algorithms as well as features like auto-play.

Fairplay and the other organizations contend that social media platforms contribute to a growing mental health crisis among young people.

“While declines in youth mental health are attributable to numerous factors, the growing use of social media platforms designed in ways that increase exposure to harmful content and encourage unhealthy patterns of use has helped exacerbate these trends,” the groups write. “Over the last two years, the pandemic has also caused youth to spend more time than ever online.”

The digital rights group Electronic Frontier Foundation opposes the bill, calling it "a heavy-handed plan to force technology companies to spy on young people and stop them from accessing content that is 'not in their best interest,' as defined by the government, and interpreted by tech platforms."

That group raises numerous concerns with the bill, including that it would encourage online platforms to “over-censor” in order to avoid the risk of liability.

The Electronic Frontier Foundation argues that content-blocking filters often don't distinguish between “good” and “bad” speech about the type of material the bill targets -- such as eating disorders or substance abuse.

Instagram, YouTube, TikTok, and Snapchat are among the social media companies that have been accused of hosting content that appears to be  linked to eating disorders. A National Eating Disorders Association spokesperson told The New York Times last year that social media doesn't cause eating disorders, but can contribute to them.