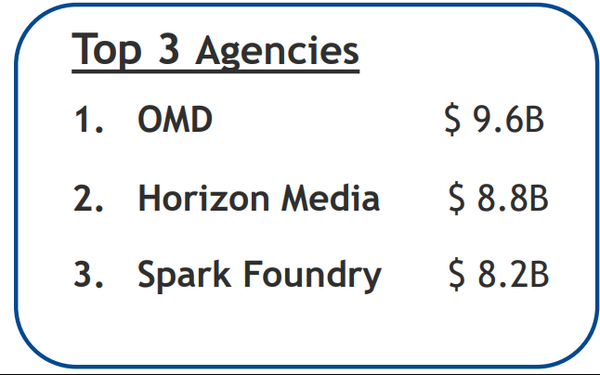 Omnicom’s OMD was the top-ranked U.S. media agency by billings in 2021 according to a new report from agency research firm COMvergence. The report also found that Publicis Media was the top group in the U.S.

According to the COMvergence report OMD retained its top-ranking last year with $9.6 billion in total billings, up 3.6% versus 2020.

Horizon Media climbed from third to second place according to the report with a 22% gain in total billings to $8.8 billion, while Publicis Media’s Spark Foundry fell from second to third with nearly $8.2 billion, a decline of more than 2%.

For the report COMvergence analyzed the billings of 28 holding company and independent media agencies representing an estimated 63% share of total U.S. billings. That’s nearly $88 billion of the total market of $140 billion. The company released results for the top 10 agencies and top 3 three groups only.

The 28 agencies analyzed in the report handled about $37 billion in digital expenditures or about 42% of their total billings.