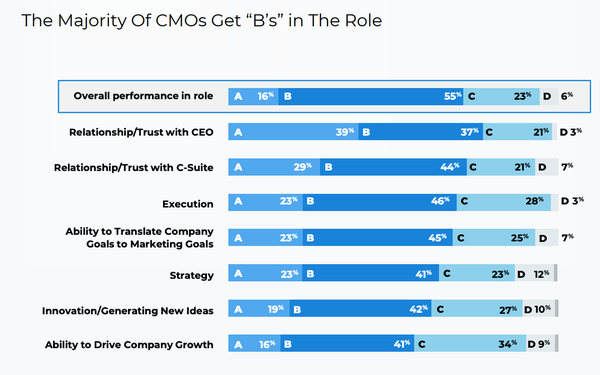 Despite CMO tenure being at its lowest levels in over a decade, there are signals for optimism in the larger C-suite as marketers and brands look to rebound from the last two and a half years.

That’s according to the CMO Performance Study from Boathouse, which aims to help CMOs continue to build success, as well as expand how academics think about the role of trust in the CEO/CMO relationship.

The overall grades were in line with the research company’s expectations going into the survey, says Boathouse CEO John Connors.

“Given how focused CMOs are on execution and how many agencies they hire for execution, it signaled there was something deeper that was impacting the CEO’s view of the CMO,” Connors tells Marketing Daily.

The “secret ingredient” from the research seems to be the CEO perception of loyalty/trust, he adds.

“Surprisingly, CEOs believe that only 27% of CMOs are truly loyal to the CEO,” Connors says. “When CMOs score high on personal loyalty and personal trust with the CEO, the perception of their performance increases significantly.”

“CMOs should embrace the fact that CEOs are crazy and mercurial as the new status quo and focus on building trust/loyalty as a way to absorb the pressure more effectively,” Connors says. “Our data highlights what is driving this complexity: CEOs are managing more issues (pandemics, inflation, racism) and more stakeholders (media, shareholders, customers, employees, etc.) than ever before.”

As a result, to be perceived more highly, the CMO needs to push the job beyond the transactional components of marketing (tech stacks, first-party data, creative, awards, use of digital/social, in-house agency, metaverse, social followers) and build a better relationship/more personal trust with the CEO in a way that embraces this complexity, he says.

Increasingly there is an expectation that CMOs are short term, and this expectation too often has both the CEO and the CMO thinking short term rather than long term, he says. It is becoming a self-fulfilling prophecy, and CMOs need to tackle this narrative head on.

“CMOs get too much of the blame, no question,” Connors says. “This is all very fixable.”

CMOs need to keep working to bring new models to bear that are not built around the classic marketing framework.

“The core building blocks of marketing theory are approaching 75 years old,” Connors says. “We need to follow the lead and find new models for success that embrace the new complexity that the CEO and the board encounter as they try and drive toward performance.”