Hulu's 'Bear' Has Beef To Spare 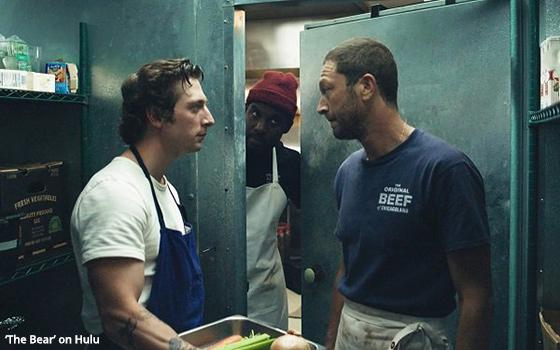 The famed Chicago Italian beef sandwich now has its own scripted TV show.

The show, titled “The Bear,” revolves around a young star chef named Carmen “Carmy” Berzatto (played by Jeremy Allen White, above photo left) who has worked at some of the nation’s best-known restaurants. The show, produced for Hulu by FX, starts streaming Thursday on Hulu.

As “The Bear” begins, Carmy has returned to his hometown of Chicago after a long absence to take over his family’s small Italian beef emporium, The Original Beef of Chicagoland.

He has come home to take up this responsibility because his brother, who had been managing the place, committed suicide.

Thus, the show’s central plot line concerns the conflict between this classically trained chef and the eatery’s close-knit staff who struggle to adapt to the changes he wishes to make.

But “The Bear” and its restaurant makeover storyline should not be mistaken for the restaurant-rescue reality shows that have long been a TV staple -- including Gordon Ramsay’s “Kitchen Nightmares” and Robert Irvine’s “Restaurant Impossible.”

“The Bear” is strictly a scripted show in which family issues and other relationships take center stage. At some point in the first episode, we learn that Carmy’s nickname within the family is The Bear. The name’s origins are not made clear at first.

Not only is Carmy’s family dealing with his brother’s recent suicide, but some members of the family want to wash their hands of this restaurant business. They think Carmy should stop running it and sell it.

Adding to Carmy’s challenges is another relative, his streetwise cousin Richie. He has already been running the place since Carmy’s brother died.

As a result (pun alert), Richie has a beef with Carmy over the way the restaurant is being run. The problem is, Carmy’s brother left the restaurant to him, not Richie.

For anyone unfamiliar with the Chicago Italian beef sandwich, it consists of juicy slices of roast beef slathered on a hero-shaped roll (these can vary in size and quality).

The sandwich sometimes comes dipped in au jus sauce -- roll and all -- and sometimes not. That depends on individual tastes. The classic Italian beef is topped with either hot or sweet peppers.

The sandwich was supposedly invented by Chicago Italian-Americans in the 1930s, thus earning its name, Italian beef.

Please note, however, that the words “Italian beef” are not a part of the restaurant’s name in the show. Moreover, I never heard the phrase “Italian beef” at any time in the premiere episode.

Despite all that, it is clear that the sandwich at the center of the show is an Italian beef.

Even though each of its episodes is a half-hour, “The Bear” is not a comedy. And to give FX credit, none of the publicity materials for the show categorize it as either a comedy or a drama.

Like this show’s Italian beef sandwiches, this show needs no labels to come highly recommended.

“The Bear” starts streaming on Thursday on Hulu.