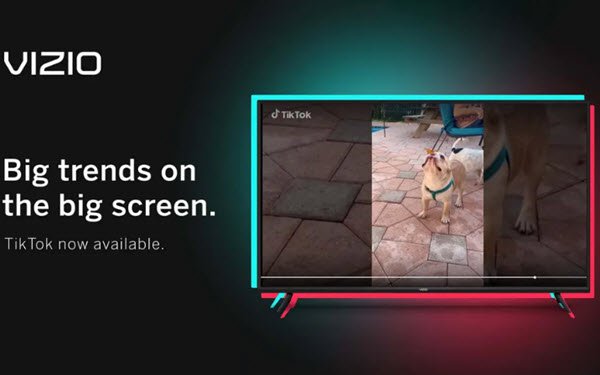 In another win for TikTok, the social video platform’s big-screen app has been integrated into Vizio smart TVs.

TikTok has been on Samsung and LG TVs, Android TV and Amazon Fire TV platforms since last year.

The TikTok TV app “has been specifically created for a TV home-viewing experience, allowing audiences to view the most popular videos across a huge range of categories, from gaming and comedy to food and animals,” Vizio said in its announcement.

In addition, Vizio users can link their TikTok accounts to consume content from their "For You" and "Following" feeds on the big Vizio screens.

TikTok has been cleaning Facebook’s clock as it grabs an increasing share of young users and their time, and the recent expansions of its once short-form-only format, combined with its availability on a growing number of large screens, is expected to further boost its growth.

However, there’s a visual downside for TV viewers, in that TikTok is formatted for portrait viewing, “which leads to a lot of empty screen real-estate on standard 16:9 aspect ratio TVs,” according to The Verge.