Documentary Addresses Ad Biz Burnout, Kills Some Of Its Darlings 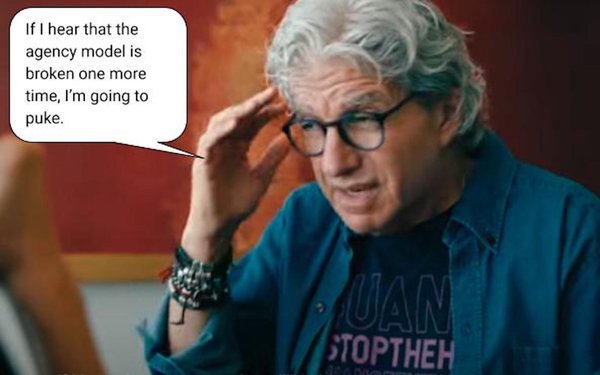 “We can hear the cracking of the big agency model. Big words, but they do kind of tell me what they’ve all been telling me,” Anouk Jans, the subject of a “Kill Your Darlings,” a new documentary about burn out in the advertising business says at the climax of the film, just as she’s entering the offices of “one of the so-called architects” of the big agency model, former WPP honcho (Wunderman, Y&R, etc.) David Sable.

The film follows Jans as she conducts a series of interviews with agency execs – both big and small and operating classic and nontraditional models – as she asks them about the nature of the ad biz, its propensity to burn people out, and whether it is the historic nature of the agency model that contributes to that.

“They say we have a burnout culture,” Jans tells Sable of her interviews leading up to his. “They are not sure that the agency set up will survive in the future.”

“I think it’s bullshit,” Sable responds, adding, “I don’t think I could be more direct than that.”

They banter on it, and Sable says if he hear’s that question one more time, “I’m going to puke.”

Sable, a devout Jew who observes the sabbath from Friday evening through Saturday, advises her to pick her own equivalent of a sabbath and “just log off.”

He goes on to admonish Jans’ thesis, asserting, “Every agency that has said, ‘The agency model is broken. We have a new model,’ go look at their freaking model. It’s the same damn model. What’s changed?”

You can watch the rest of the documentary, which premiered at the Cannes Lions this week, below.

cannes
1 comment about "Documentary Addresses Ad Biz Burnout, Kills Some Of Its Darlings".
Check to receive email when comments are posted.
Next story loading