Authoritative A&E Black Comedy Doc Tells It Like It Is, And Was 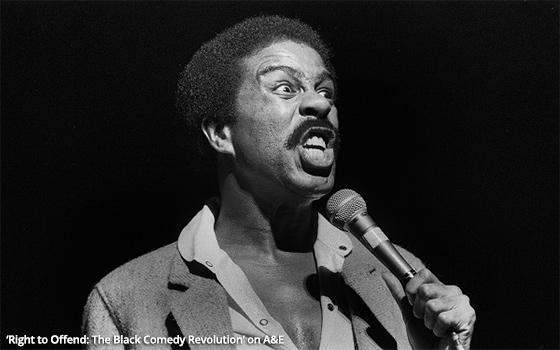 African-American comedy today not only makes audiences laugh, but it is also a form of activism.

That is the central thesis of a two-part documentary coming to A&E this week on the history of African-American comedy. Suffice it to say that this documentary fulfills its promise.

It is a striking, illuminating documentary, rich in archival film and video plus expert, authoritative commentary by academics and entertainers alike.

Above all, it feels fresh. Aspects of this history have been explored before in documentary form. But while watching this one, I felt as if I was learning about this subject matter for the first time.

As a result, I was able to see and experience the evolutionary arc of black comedy in America in a way I had never seen it before.

This eye-opening exercise in new perspectives comes from Kevin Hart’s production company, Hartbeat. Hart is the first person to appear on the show.

“The role of a black comedian today is not the same as yesterday. [The comedian’s] role is bigger than being funny,” says Hart, setting the stage for what is to come.

His simple statement positioning the whole documentary comes right after some similar statements placed on-screen at the start of Part One of “Right to Offend” before he appears.

“This is the story of how black comedians deliberately used humor as a tool to call out discrimination and fight for social change,” this copy says.

“It includes frank discussions on racism, racial violence, offensive language and suggestive dialogue that may be disturbing to some viewers. Viewer discretion is advised.”

The latter sentence is likely meant to encompass the doc’s many casual f-words, and also the n-word, which is uttered by, among others, Richard Pryor early in the Part One.

But unlike the many instances in which the f-word is applied gratuitously and unnecessarily in the world of scripted TV, here it blends naturally and honestly into the comments and observations voiced by this documentary’s dazzling array of interview subjects.

An A&E press release about the show lists 51 of them, including 29 comedians plus directors, producers, academics and authors of black-entertainment histories.

Some of the nation’s top black comedians participated, probably because Kevin Hart invited them to, and also because they were likely eager to take part in what might be the definitive film made on the subject of their profession.

In its early portions, the documentary presents a brief overview of the state of black performers in the 20th century -- from the black-face minstrelsy of the early part of the century through the Golden Age of Hollywood, in which black performers were seen mainly as chauffeurs, railroad porters and housemaids -- usually comedic, but often buffoonish and lazy.

The documentary starts to really show its quality when it reaches the 1950s and then tells the story of Dick Gregory.

Based on an overwhelming body of evidence persuasively provided by the documentary, it positions Gregory as the black comedy movement’s true godfather and pioneer to whom all black comedians that came after him owe a great debt.

The Gregory portion of the doc represents one of this film’s great strengths -- resurrecting figures such as Gregory from a now-distant past and bringing him and his era vividly to life.

Another strength is in the way it leaves no pioneer behind when it includes names of entertainers who may be wholly unfamiliar to contemporary audiences -- including Slappy White, Redd Foxx, Nipsey Russell, Godfrey Cambridge and Moms Mabley.

They were all pioneering African-American comics who comprised the first wave of black comedians who penetrated the world of white nightclubs and television.

The month of June has long been a month of relatively dead air in the world of television. “Right to Offend” is a very welcome exception, and will likely emerge as one of the highlights of the summer TV season.

“Right to Offend: The Black Comedy Revolution” airs in two parts on Wednesday (June 29) and Thursday (June 30) at 9 p.m. Eastern on A&E.