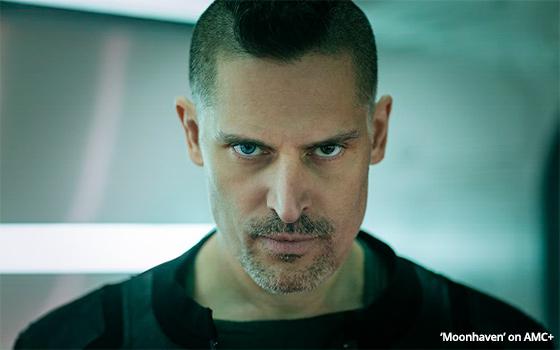 In the show, advanced artificial intelligence has masterminded the transformation of a portion of the moon’s arid, lifeless surface into a verdant Eden where a group of human pioneers are living and by all appearances prospering.

In fact, the AI technology that has created this new world is positioned as God, for this AI deity has not only provided air to breathe in this airless place, but has built a natural ecosystem to sustain humans and animals alike.

This lunar Eden in which a new human community and culture has been carefully nurtured and controlled is presented as a paradise from which a new era in human existence may eventually spring.

That all depends on whether the AI technology that created this new moonscape can be brought to bear on a planet Earth that is much in need of sprucing up, to say the least.

The success of this venture will also depend on Earth’s current inhabitants’ ability to welcome and absorb the arrival of the moon’s human inhabitants, a group known as Lunars whose experiences in the new Eden set them apart from the residents of Earth.

Introductory copy shown at the start of Episode One on “Moonhaven” sums up the show’s storyline: “The Earth is dying, and its people with it. Settlers have been sent to the moon with our most powerful artificial intelligence to solve Earth’s problems and save us.

“After three generations, they have built a society that can survive the future. The time has come to bring it home.”

“Moonhaven” takes place 100 years in the future. With its theme of artificial intelligence evolving far past the way we recognize it today, the show is another in a growing list of TV dramas released in the last few years that present various scenarios for the future of Earth.

Whether it is the onset of pandemics, advanced global warming, wars, technology run amok or even apocalyptic zombie armies, TV’s future fiction dramas almost always come down decidedly on the negative side.

It is not unreasonable to posit that “Moonhaven” and all the rest represent reactions to the world’s woes as we on Earth have been experiencing them for a decade or more.

If this group of shows reflect anything, it is fear -- fear of global warming, for example, and its potential consequences, real or imagined; and the age-old threat of nuclear attacks or even war as these weapons proliferate around the world.

The march of climate change and the nuclear threat seem unstoppable. And therein lies the fear reflected in so many of these shows, including “Moonhaven,” whose introductory copy states flat out, “The Earth is dying.”

Other shows reviewed here from the last few years that covered similar apocalyptic ground include “Devs” (technology that can preprogram human DNA), “Day of the Dead” (zombies), “Station Eleven” (pandemic apocalypse), “Next” (out-of-control AI), “Raised By Wolves” (post-apocalypse) and others.

“Moonhaven” is a welcome addition to the group. With its perfect moon Eden and its imperfect planet, the show represents a new point of view on our future -- namely, the future looks bleak, but a manmade tech God just might save it.