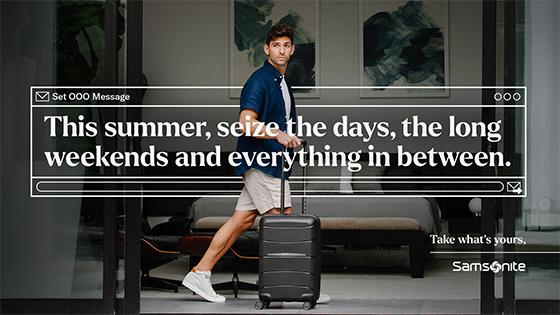 Samsonite’s summer campaign — “Take What’s Yours” — encourages people to travel after staying put during the pandemic.

The luggage company wants PTO (Paid Time Off) to be seen as part of a work-life balance, as well as a well-deserved break. That begins by tuning the office out.

The creative, by Iris Worldwide, with Famous After Death producing campaign videos, shows moments of summer fun via the prism of typing the standard out-of-the-office mail.

Time off, Samsonite suggests, isn’t a bonus, it’s what hardworking people deserve. And the company believes its wide selection of bags and accessories can accommodate any excursion.

There is also a streaming audio element on Pandora and Spotify. In addition, Samsonite is partnering with dozens of TikTok influencers.

Nicole Adriance, senior director of brand marketing, Samsonite, told Agency Daily: “The campaign launch runs through the end of August. The campaign story draws on the statistics that millions of Amercians fail to take their PTO each year. We want to encourage everyone, whether you work in an office or not, to maximize the long-awaited summer season by taking advantage of PTO, long weekends, and everything in-between.”