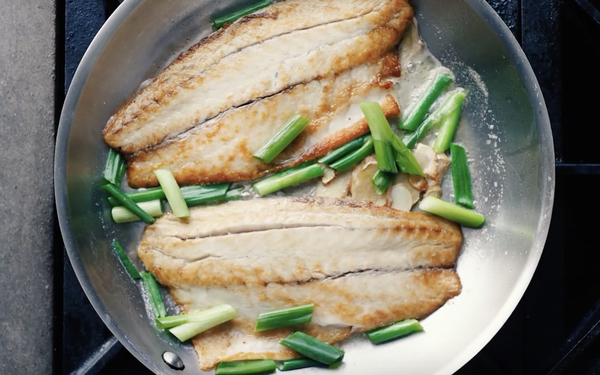 While Australis Aquaculture says it provides 90% of the Asian sea bass known as barramundi to the U.S. foodservice industry, its nascent The Better Fish brand is new to retail channels.

With The Better Fish’s barramundi now available at Costco and other retailers, the challenge is to begin generating awareness for both barramundi and the brand without taking on too much too soon.

Those first steps are encapsulated in a campaign from the Bray & Co agency that shows barramundi being cooked with butter, garlic, soy and tomato, but with no voiceover or soundtrack—just the sound of fish sizzling in the pan.

Only at the end of the spots do the words “Did you enjoy that?” appear, followed by “Now enjoy this. BARRAMUNDI. The Better Fish.”

In this interview, edited for brevity and clarity, Bray & Co founder Peter Bray talks about the genesis of the campaign concept and how it will play out going forward.

Marketing Daily: What is the strategy behind this creative approach?

Bray: The key insight we came up with is, there’s a new definition of what healthy eating is. In the past, if you ate healthy it was very much about saturated fat intake, calories, sugar and reducing those things.

The reality now—rightly or wrongly—is that healthy has been refined. There’s a wave of opinion that says healthy eating is actually how you feel when you eat. That’s why the campaign does not go into all the dietary benefits of eating barramundi.

Marketing Daily: Why no voiceover or soundtrack?

Bray: We wanted to activate peoples’ taste buds and have them salivating. In order to get recall and share of mind, you want marketing that is simple, consistent and creates a high level of arousal. It wasn’t a frivolous decision or stunt in any way. It was very deliberate strategically.

Marketing Daily: Why don’t the spots explain what barramundi is?

Bray: This is part one of a multipronged campaign. We understand people don’t even realize it’s a food. That’s why we show it’s a fish first, and then at the end say it’s barramundi and show The Better Fish logo. The packaging itself is where there’s a useful cue. It says sustainable sea bass. So there’s a linkage to a fish that a lot of people know and consume.

Marketing Daily: What future iterations can we expect?

Bray: The next step: How do we remove the linkage and not rely on sea bass, but have barramundi stand on its own? I can tell you that in the future we will be playing on the fact that people don’t know how to say barramundi. We didn’t want to jump straight into that and play up the uncertainty. We felt it was a stronger call to action to show it cooking and it being delicious than it was to try something new.