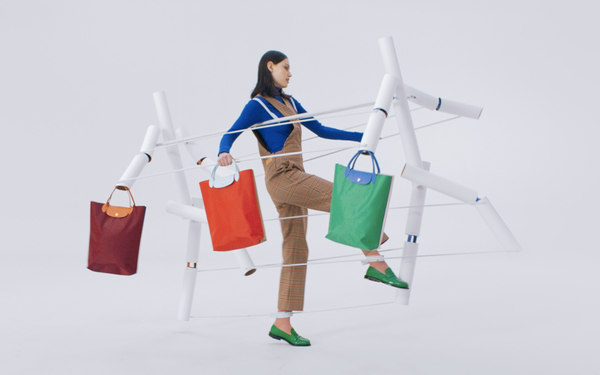 Longchamp is about to launch the second chapter of “It is not a bag. It is Le Pliage.”campaign with two new spots, created by agency Fred & Farid Los Angeles.

The campaign’s second incarnation celebrates Le Pliage Cuir, made of métis leather, and Le Pliage Re-Play, a new, recycled bag made with remaining fabric from Longchamp's atelier, part of the company's sustainability mission.

The media campaign — digital, display, social — will kick off in 15 countries starting July 12 and August 9, respectively. Products will be available for purchase online on July 19.

Set to the same track as the launch effort, the “Replay” spot shows two women as they unspool the ends of fabric rolls to craft Le Pliage Re-Play bags. The duo creates marionette-style figures that hold their new bags and dance around with them, twirling gracefully as the group showcases their new creations.

The production company was Studio Sander Plug, which handled the campaign's debut. Le Pliage Re-Play bags are only available in limited quantities.

The Le Pliage Cuir campaign will be mainly broadcasted in Asia, in addition to Le Pliage Re-Play.

This campaign is the third global Longchamp campaign from Fred & Farid since their collaboration began in 2020.