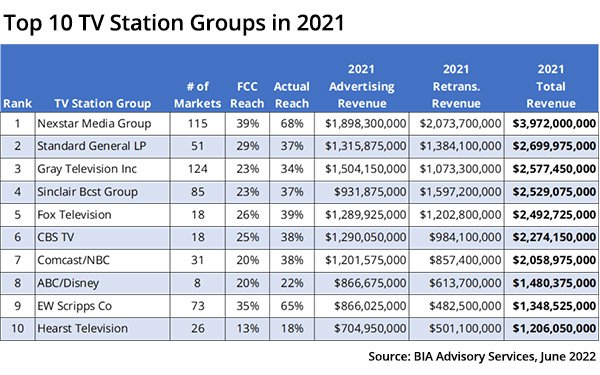 The biggest owner of U.S. TV stations, Nexstar Media Group, continues to grow -- again, the biggest TV station group in terms of annual revenue -- up 10% in 2021 to $3.97 billion, according to BIA Advisory Services.

In second place -- pending the closure of its deal for Tegna station group -- is Standard General with a combined $2.7 billion in revenues in 2021, $1.32 billion in advertising and $1.38 billion in retransmission fees.

Nexstar also leads in overall actual U.S. reach -- 68%, this coming from stations in 115 markets. EW Scripps -- which sits in ninth place in terms of overall revenue -- is next at 65% actual reach from station coverage in 73 markets.