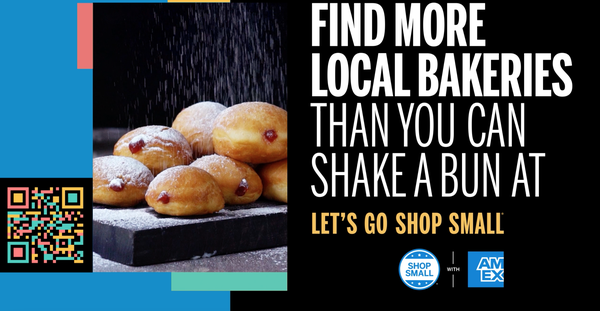 The interactive campaign aims to make it easy for consumers to discover local small businesses. QR codes featured in creative will introduce consumers to nearby summer businesses that are featured in the creative - from bookstores and ice cream stores, to clothing and barber shops.

Once consumers scan the QR code, they will be provided with relevant local businesses from the American Express’ Shop Small map.

The campaign is running in New York, Los Angeles, Chicago, Washington, Boston, Denver and San Francisco throughout the summer.

Creative was developed in a collaborative effort both internally and across  agency partners including Dentsu, UM Worldwide and Barbarian.

“This is our North Star,” she tells Marketing Daily. “The Shop Small initiative is core to who we are as a company and a powerful proof point of our commitment.”

According to a new Shop Small Summer survey from American Express, 90% of consumers say they are likely to shop small this summer, either in their own community (88%) or in the local area while traveling (83%).

While 63% of owners say that the size of their local small community has decreased since the pandemic,  there’s evidence that local customers are rising to the occasion to show their support, with 71% of small business owners saying they have seen an increase in local shoppers in the past year, compared to 2021, according to the survey.

Meanwhile, 58% of small business owners expect to see an increase in business during the summer compared to the rest of the year, and 39% say summer will be their busiest season of the year in terms of sales. A majority (87%) say that local support is integral to the success of their business this summer.