One-Day Promo Earns Major Buzz For Jack In The Box 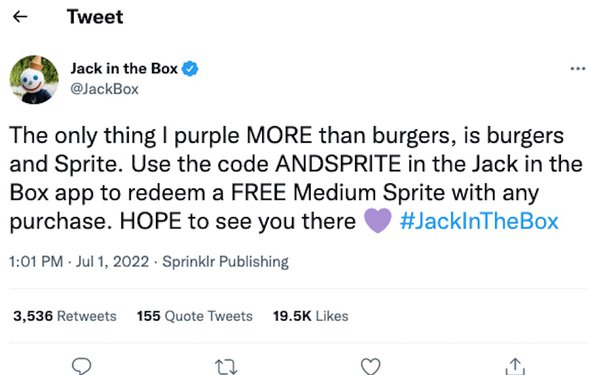 Celebrity-inspired QSR promotions can pay off nicely—especially if you serve them up quickly.

That’s the takeaway from the one-week turnaround of a Jack in the Box promo in response to news that J-Hope of the Korean boy band BTS was naming his latest album "Jack In The Box."

“We saw there was this spiking conversation around the Jack in the Box name and how the BTS army was already making this connection to our brand,” Mallory Blair, CEO of Jack in the Box’s publicity agency, Small Girls PR, tells Marketing Daily.

“So we did our research and learned that J-Hope has this really special connection with Sprite. In a lot of his English-speaking interviews, he will work Sprite into the answer. So Sprite is a catchphrase that has become an inside joke with his fans.”

“We came up with this idea that we could have a connection to J-Hope and Sprite and offer a promo code for a free medium Sprite with any purchase.”

The agency pitched the idea to Jack in the Box the following day and was quickly given the green light.

On Friday July 1—when the first single from J-Hope’s new album dropped—people who used the promo code ANDSPRITE in the Jack in the Box app got a free, medium Sprite with any purchase.

“We’re seeing that we’re no longer in a mono culture,” says Blair. “You have to have your finger on the pulse of many different niche cultures and understand how they have pockets of authenticity with your brand and what it’s about.”

She describes the promo as a “totally earned campaign that was a news hijack.”

It was picked up by, among others, Los Angeles Times, Billboard and “The Today Show.”

On TikTok, “We have over a million views of user-generated content just about this single promotion that only lasted one day.”

“We came up with a campaign to redirect frustrated customers of McFlurry to go to the nearest Jack in the Box instead.”