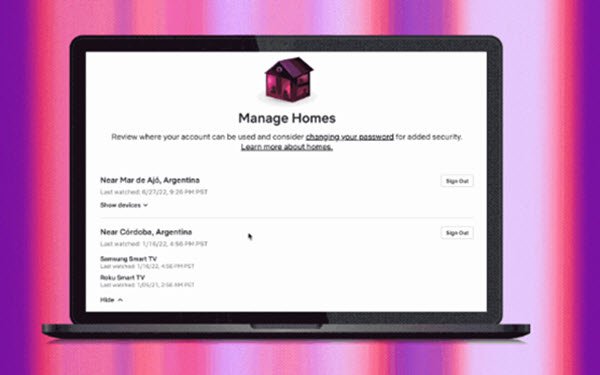 After a rocky start to curbing free password sharing in tests of an “add extra member” approach, Netflix is trying a different tack, dubbed “add a home,” in some new markets.

Netflix needs to increase revenue, as well as revive subscriber growth, as it continues to invest heavily in content to compete in a increasingly crowded environment that's also now challenged by consumers' battle with inflation. Success at getting free password sharers to pay could support both objectives. As many as 100 million subscribers worldwide are engaging in the practice, according to the company’s own estimate. But the flip side is the danger of alienating and losing large numbers of subscribers.

“Today’s widespread account sharing between households undermines our long-term ability to invest in and improve our service,” Chengyi Long, director of product innovation, said this week in a blog post announcing the new approach in new markets.

Account owners began being charged fees for Netflix users outside their homes, but at least initially, many were confused about Netflix’s definition of an extra household, how many people outside the main household were covered by the fees, and varying fee amounts and enforcement practices. That drew the attention of local consumer protection agencies.

Now, starting next month, Netflix will launch an “alternative” in Argentina, the Dominican Republic, El Salvador, Guatemala, and Honduras.

It states that each Netflix account, whatever the plan it is on, includes just one home where the service can be used on all devices for the core subscription price. Users in that household can watch Netflix when outside the main home, but only on tablets, laptops or mobile.

Use by additional homes can be purchased for an extra per-month fee that varies but is clearly stated for each market:  219 pesos in Argentina, and $2.99 in the Dominican Republic, Honduras, El Salvador and Guatemala.

Members on the Basic plan can add one extra home, Standard up to two extra, and Premium up to three extra.

Through a new “manage homes” feature (above), owners will “soon” be able to control where their accounts are being used, and remove homes at any time from their account settings page.

“We value our members, and recognize that they have many entertainment choices,” so “we’re working hard to make great TV shows and films, and to be as thoughtful as possible about how we charge for use across multiple homes,” wrote Long.

“We will not make changes in other countries until we better understand what’s easiest for our members,” she added.

On Tuesday, during its second-quarter earnings report, Netflix acknowledged that it is experimenting with various approaches to implement paid service sharing, to inform a wider rollout in 2023.

Other streaming services are reportedly watching the results of Netflix’s efforts closely, hoping to skip the perils of their own learning curves when it comes to putting a stop to widespread free password-sharing.

Netflix reported that it had lost 970,000 subscribers worldwide in the second quarter — actually somewhat positive news, given that Netflix had warned that it could lose as many as 2 million in the period.

The company also projected that it will increase its total of 220.67 million subs worldwide as of the end of Q2 by 1 million in Q3 (slightly lower than Wall Street expectations).

Netflix said it will launch its other new revenue-boosting initiative, its ad-supported tier, in “a handful of markets” in early 2023 — a bit later than its original end-of-2022 goal.

However, its executives warned that the strengthening U.S. dollar could negatively impact its international revenue, which contributes about 60% of total revenue.

The foreign exchange issue limited revenue growth to 9% in the quarter, to $7.97 billion (versus analysts’ expectation of $8.04 billion), they reported.

However, a reported $3.20 in earnings per share exceeded analysts’ $2.94 expectation.

The company’s shares, which were down nearly 70% year-to-date, rose by as much as 8% on Tuesday.