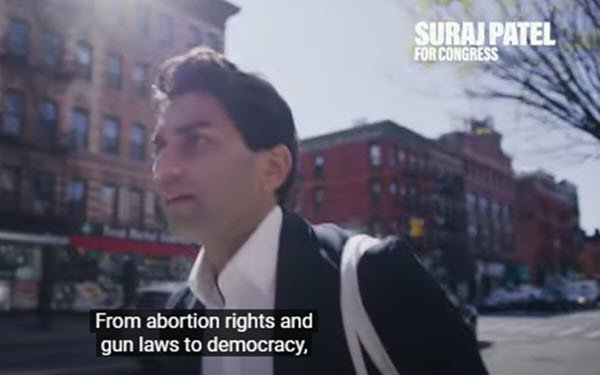 Disney-controlled streamer Hulu initially rejected an ad from a Democratic candidate, saying it contained too much content focused on “sensitive” issues including abortion, climate change and gun laws.

The original ad, for Suraj Patel, a progressive who is challenging New York Democratic congressional representatives Carolyn Maloney and Jerry Nadler in the mid-term elections, has Patel stating: “From abortion rights and gun laws to climate change, 1990s Democrats are losing every major battle to Mitch McConnell.” It also shows images of the Jan. 6 insurrection, and warns that “Trumpism is on the rise.”

The original ad began running on cable TV on June 30. Cable and TV networks are legally obligated to accept political ads even if they are inaccurate or controversial.

A Hulu rep told the campaign that due to the service’s new, unpublished acceptance policies, the opening statement in Patel’s 30-second ad would need to be changed to cite “permissible” issues like taxes, infrastructure and democracy, a Patel campaign source told Jezebel.

To get the ad on Hulu, Patel agreed to substitute “democracy” for “climate change” and show shots of people holding QAnon signs  instead of insurrectionist footage. However, he insisted on retaining the references to abortion and gun laws, citing the recent, historic decisions on these issues by the Supreme Court.

The revised ad (screen grab above) is now running on Hulu. (It was also posted on YouTube, but was removed this morning.)

But Patel last week sent a letter to Hulu urging the company to stop “censoring” the ad.

“We are at an absolutely critical time in our nation's history. Democracy is under attack from insurrectionists,” Patel wrote. “A women’s right to an abortion was taken away by the Supreme Court. Guns are flooding our streets and killing children in schools. Climate change is not only here but is impacting us every day. How are voters supposed to make informed choices if their candidates cannot talk about the most important issues of the day? Less speech and censorship may explain the erosion of these rights and the increasing distrust in our democratic institutions. I ask that you reconsider your censorship policy and that we resolve this situation expeditiously.”

In May, Hulu also rejected an ad for Rep. Carolyn Bourdeaux (D-Ga.) that mentioned her “staunch pro-choice” position. Bourdeaux lost the Democratic primary.

Hulu did not reply to Jezebel’s request for comment.

Disney -- which has recently tangled with Florida Governor Ron DeSantis and his administration as a result of the company's opposition to the state's so-called "Don't Say Gay" law -- has said that the ad-supported tier of its Disney+ streamer, set to launch later in 2022, will not take political ads.

Streamers' ability to reject political ads could help reduce misinformation, but also threatens to limit discussion of important issues on channels that are now used in place of cable and/or network by many Americans.