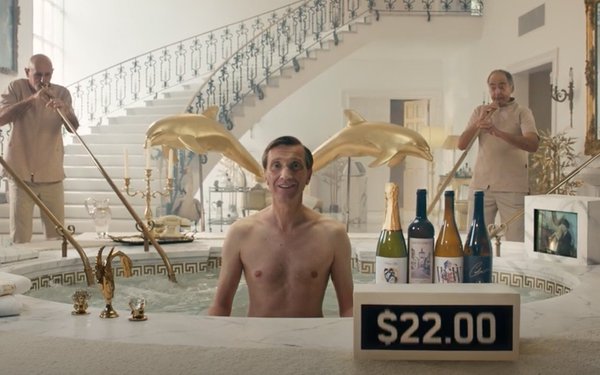 If the retail price of wine seems unreasonably high, blame the villainous “middleman.”

“Our job is to inform people that they’ve been ripped off for a long time,” says Matt Nall, a writer at Naked Wines agency Callen.

“When you’re telling somebody that they’re being ripped off, you want to do it in a humorous way and leave them with a little smile.”

Naked Wines works with over 100 wine-making partners to eliminate the markups of distributors and retailers—AKA profiteering middlemen.

The Middleman’s callous attitude is unabashedly on display in the new campaign—whose creative is a major departure from previous Naked Wines advertising that focused largely on independent vintners.

This spot opens with the Middleman sitting in his opulent, servant-staffed home explaining how people like him in the supply chain can make a bottle of wine that takes $8 to make cost $30 at retail.

After he’s seen being pampered on a tennis court and in a bath-tub-equipped limousine, he laments that Naked Wines “connects you directly with the best independent wine makers to give you an honest price—which is bad business for me.”

While the target audience for the campaign is wine drinkers, it’s not directed at people who frequent wineries or belong to wine clubs, according to Callen managing director David Hughes.

“We’re not trying to steal market share from those wineries and those brands,” says Hughes. “We’re trying to offer people a better product in comparison to the wines they would grab off the shelf if they’re at retail or shopping for a house party.”

The reason for the “over-the-top and dramatized” creative is, “we need to you lean in and pay attention,” adds Hughes.