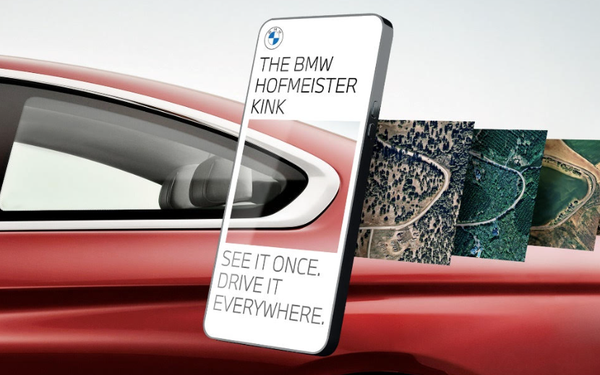 BMW of North America is offering driving enthusiasts a way to discover and drive curvy roads via an AI platform.

The activation, created by IPG’s data-driven creative agency Performance Art, is in honor of the 60th anniversary of the Hofmeister Kink, a design element that has been included on most BMW models since 1962. It was originally created as a visual indicator of rear-wheel drive and forward momentum.

The feature is located near the base of every BMW’s rearmost pillar and derives its moniker from the name of its creator, Wilhelm Hofmeister, who led the BMW design department in from the 1950s through the 1970s.

Using a complex system of data and custom-designed AI, Performance Art identified all 56,000 Hofmeister Kink-shaped roads in the U.S., allowing drivers to discover and drive roads that match their own vehicle from a library of BMW models.

To activate the program, over one million BMW owners across the United States will receive individualized emails with directions to the nearest Hofmeister Kink-shaped road that matches the Hofmeister Kink on their vehicle.

Users can keep a log of their "kinks” driven and share their stats on social media channels through the platform, which can be found on the newly created hofmeisterkink.com.

The campaign launched this week and is supported by digital, paid and organic social, CRM and in dealerships.

The Hofmeister Kink is an important part of BMW’s design legacy and is a bit of insider info for BMW owners and enthusiasts, said Kevin Campbell, head of CRM, BMW NA.

The activation gives consumers a way to experience BMW’s performance design ethos on the everyday roads near them, he adds.

BMW owners tend to be loyal, so the challenge is to continue to find new and interesting ways to further deepen that relationship and drive engagement, says  Ian Mackenzie, chief creative officer of Performance Art.

“Hofmeister Kink is a really powerful loyalty trigger because it’s a design element about which the BMW owner and enthusiast community feels uniquely passionate,” he tells Marketing Daily.

The goal is to help the world re-discover the iconic brand asset by seeing it with fresh eyes, and then literally driving it, he adds.