Linear TV Down In Major Markets, On-Demand To Surpass Linear In U.S. This Year 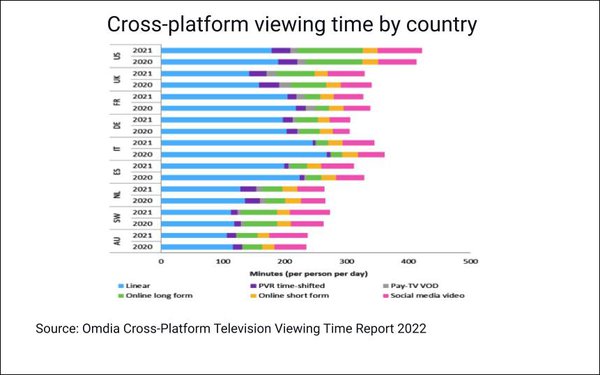 The linear declines reflected the end of COVID lockdowns in 2021, as well as the ongoing shift toward on-demand viewing.

“In highly developed markets such as the U.S. and the U.K., 2021 will likely be the last year where linear predominates over non-linear TV viewing,” observes Rob Moyser. “On a platform-by-platform level, however, linear TV still remains by some distance the most popular way to watch TV in the markets covered.”

Due to the linear declines and smaller declines , Daily viewing time across all viewing platforms declined by two minutes, of 0.5%, to average six hours and 2 minutes per day per person. That small decrease resulted mostly from the linear decline, along with smaller declines in online short-form and pay-TV video-on-demand. Those were largely counterbalanced by growth in online long form and social media video viewing.

Online long-form grew across all of the markets, increasing by eight minutes on average, to reach an average 68 minutes.

The growth was driven by the launch of major new subscription streaming services, including Discovery+ and Paramount+, along with existing SVODs like Netflix, Amazon Prime, and Disney+.

Time spent viewing video content on social media platforms increased by 9 minutes, to an average 60 minutes per person per day across the markets analyzed.

TikTok was the video-growth standout, and is set to overtake Facebook in total time spent for the first time in 2022.

research, streaming, television, video
1 comment about "Linear TV Down In Major Markets, On-Demand To Surpass Linear In U.S. This Year".
Check to receive email when comments are posted.
Next story loading