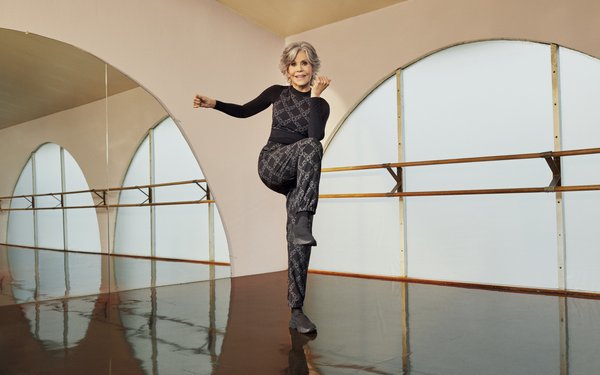 H&M is getting into the activewear game, launching the H&M Move collection with a campaign starring Jane Fonda. The 84-year-old actress hoofs it up with choreographer JaQuel Knight, best known for his work with Beyonce, demonstrating the apparel’s fit and flexibility.

The Swedish company doesn’t seem to mind that most of its audience is too young to recall the actress’s “Feel the burn!” fitness fame from the 1980s. Her popularity surged among millennials with Netflix’s “Grace and Frankie,” which recently ended a seven-year run. And she’s finally breaking into voiceover work as a dragon with “Luck,” an animated film from Apple TV.

She’s also set to star in the upcoming “80 For Brady,” alongside Sally Field, Lilly Tomlin and Rita Moreno as a bunch of 80somethings with an affinity for quarterback legend Tom Brady.

“Removing barriers to sport is very much at the heart of our purpose, starting with democratizing sports apparel,” said Simon Brown, general manager of the new line, in its announcement.

H&M Move includes Move Essentials for men and women, with tops, jackets, tights and bras, alongside items specifically designed for training and running. A special H&M Move Monogram Collection, like the tracksuits worn by Fonda and Knight in the ad, is also part of the first product drop.

The fast-fashion brand is constantly under the microscope for cheap-chic's s assault on the environment and says that 85% of the materials for H&M Move are recycled or sourced sustainably. It aims to reach 100% sustainability by 2030.

So far, H&M sales are holding up well, while economic concerns are softening apparel sales for many companies. In its most recent results, H&M says sales grew by 12% in local currencies. And it’s been able to sell more clothing at full price, avoiding the expense of promotional markdowns.

“Sales in physical stores increased substantially while online continues to do well,” said Helena Helmersson, CEO of the retailer, in its latest earnings report. “This once again shows the value of having both physical and digital channels which strengthen and complement each other.”