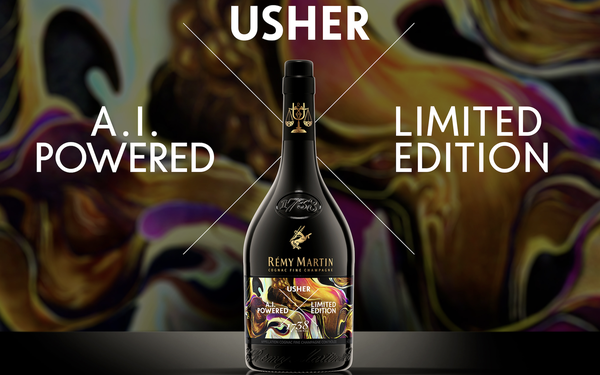 With the help of artificial intelligence, Grammy award-winning musician Usher made “the invisible visible” to design a limited-edition bottle of Rémy Martin cognac.

His descriptions of the taste of Rémy Martin were fed through Generative Adversarial Neural Networks and Contrastive Language-Image Pre-Training—an AI process that translated his words into images.

Unlike the complicated AI nomenclature, the process itself is easy to comprehend when seen in action in creative from Fred & Farid New York.

“When the Remy’s in your system, it tastes like a beautiful melody: an assortment of warm and spicy notes that dance in harmony.” Usher says in this 60-second spot as his words become images on a display behind him.

After generating more than 50 visions, Usher decided on a psychedelic-inspired label that adorns the limited-edition Rémy Martin 1738 Accord Royal cognac—which is characterized by notes of toasted bread, vanilla and brioche.

Just 50 bottles of Rémy Martin 1738 Accord Royal were produced—25 of which can be purchased via NFTs on the blockchain technology D2C site BlockBar.com

“There was no doubt in our mind that Usher would be the right partner to help us bring to life our very first limited-edition for Rémy Martin 1738 Accord Royal,” Rémy Martin global executive director Amaury Vinclet tells Marketing Daily.

According to a rep for Fred & Farid, the starting point for the creative concept was to “find a harmony between what you see from an external point of view and what you feel internally when you taste the product.

“We asked ourselves, ‘what if you can see the taste of what you were about to drink when you look at the bottle?’"

Another element of the campaign is an immersive event called “A Taste Of Passion” following each of Usher's Las Vegas residency concerts, promoted by billboards placed throughout the city.