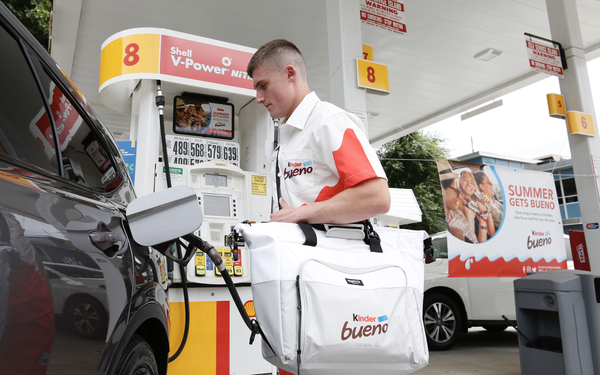 Gas prices in the U.S. have actually fallen for 50 straight days, down to an average of $4.139 a gallon as of Thursday morning, according to AAA. But that’s still about a dollar higher than last summer. And prices of other items continue to rise, putting pressure on drivers' wallets.

So, as people hit the road for their annual summer vacations, several brands are using the lure of free gas in promotional campaigns. Here are three of them, representing the tech, QSR and CPG categories:

Verizon has begun a national “Fuel the Love” tour, which will surprise consumers over the next few weeks with a free tank of gas at a single gas station in at least 15 cities.

So far, Verizon has visited Phoenix, Arizona, Portland, Oregon, and Madison, Wisconsin, where more than 80 customers got the gas during a four-hour period last week, kicking off the campaign. That was at a Kwik Trip gas station, with a Verizon spokesperson telling Marketing Daily that the brand’s gas station partners will vary market to market.

“We’re topping off pumps all in the name of kindness,” stated Krista Bourne, chief operating officer, Verizon Consumer Group. “We know how tight budgets are today, and we hope to have helped not only directly with those who received a free tank, but also inspire others to help out where they can as well.”

Verizon, which won’t reveal any “Fuel the Love” locations in advance, noted that its Verizon Visa Card, available only to Verizon Wireless customers, gives 4% in rewards for all gas purchases.

Through the end of August, Uno Pizzeria and Grill is giving consumers $5 back to pay for the gas they use driving to its restaurants for dine-in meals.

“We hope to give away the equivalent of 100,000 gallons of gas,” stated Uno chief executive officer Erik Frederick. “Every bit helps in these challenging times.”

Diners can get their coupon at unos.com/gaspromo and use it when they spend at least $20 on food in the restaurant. (And yes, the coupon will work even if the consumer walks or takes public transit to their local Pizzeria Uno).

The brand is also giving out free gas cards among the many prizes in a “Summer Gets Bueno” sweepstakes running through Aug. 11.

"Nothing says summer like a road trip with friends and family, however, these days that can come with a hefty price tag," stated Shalini Stansberry, vice president of marketing, Kinder Snacking. "That is why we launched 'Summer Gets Bueno' as part of our ongoing 'Life Gets Bueno' campaign, to help people get where they need to go and to savor their summer road trips by taking a crispy, creamy Kinder Bueno along for the ride.”