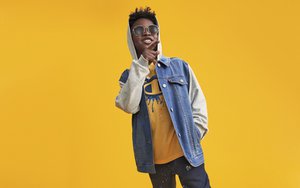 Macy's is hoping to break through the back-to-school clutter with a new campaign that aims to highlight kids' fast-changing style sense.

Ads showcase bright combinations of trendy fashion finds and essentials, all aimed at helping them own their style.

The new work "celebrates how kids' and teenagers' styles are constantly evolving, from year-to-year and in some cases even week-to-week," says a Macy's spokesperson.

The campaign is from Major Behavior, a boutique agency in Chicago, and includes TV, digital and print.

While the Macy's effort comes relatively late in the cycle, that's likely by design. This year, as inflation cuts into family budgets, more parents are playing the waiting game, reports the National Retail Federation.

That's especially pronounced among college shoppers, with 28% of college-bound students saying they intend to wait until the final two weeks before school starts.

And spending priorities are shifting, the NRF reports. Among college kids, just 54% say they'll buy a laptop this year, the lowest since 2017. But more are shopping for fitness trackers and smartwatches.

The NRF's research, conducted by Prosper Insights & Analytics, includes nearly 8,000 parents of kids in kindergarten through college. It reports that 88% still hadn't gotten their what-to-buy lists from schools by early July, with just 42% expecting them by the end of July.

Macy's is also playing up its long-running love with with Reading is Fundamental, raising $1.5 million through July for the literacy nonprofit. In its 18-year partnership, Macy's has helped RIF raise more than $46 million in donations. It's also a founding partner of RIF's "Race, Equity and Inclusion Initiative," which provides books and literacy resources to marginalized and at-risk youth.