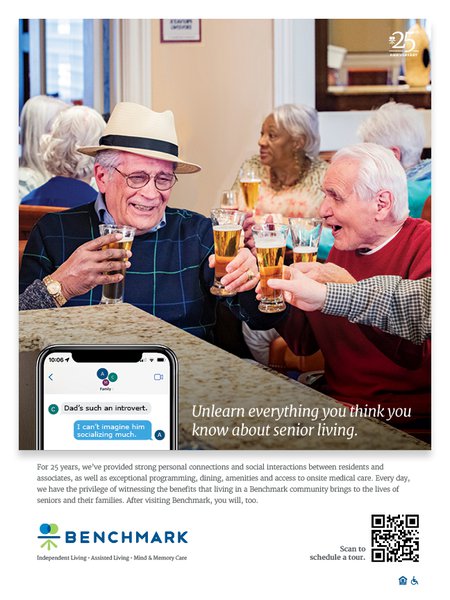 “Unlearn everything you think you know about senior living.”

That’s the main text in a print, digital and social campaign launched by Benchmark Senior Living  in the seven Northeastern states where it runs 64 assisted living facilities.

In the campaign, five ads seek to accomplish the tagline’s mission by juxtaposing scenes of seniors enjoying themselves against images of skeptical text conversations from their adult children.

For example, in an ad showing  a group of men happily raising glasses of beer, the text message reads “Dad’s such an introvert” with the response “I can’t imagine him socializing much.”

In another, a woman is shown absorbed in reading while an attendant vacuums around her.

“Mom will never let someone clean for her,” reads the first text message. “Never,” responds another offspring.

One ad even strives for authenticity by including a typical text typo. The photo shows a man and two women reading materials in the back of a moving vehicle. “Dad’s likes to be in control,” reads the first text message, “He’ll never let anyone else drive” is the response.

The Fantastical is the creative agency behind the campaign, with Carbon handling social and Arnold Communications, media.

That media, running through November, consists largely of  Hearst and Gannett-owned media outlets, Marla Rappaport, Benchmark's vice president of marketing, told Marketing Daily.  For example, Connecticut residents will see ads not only on USAToday.com, but in the New Haven Register and Connecticut Post.

As might be suspected by each ad’s text messages and the tagline refuting those messages, the target audience is primarily adult children concerned about the health and well-being of their parents or grandparents. A secondary audience, Rappaport notes, is “seniors themselves who want to give up things like home maintenance and instead spend their time doing what they love.”

“In terms of size and scope, this is one of our largest campaigns to date,” she adds. “We really want to change people’s perceptions about senior living and the experiences we offer.”

Each ad also includes an explanatory paragraph underneath, with such info as “for 25 years, we’ve provided strong personal connections and social interactions” and “Every day, we have the privilege of witnessing the benefits that living in a Benchmark community brings to the lives of seniors and their families. After visiting Benchmark, you will too,” Alongside the paragraph is a code to scan “to schedule a tour.”