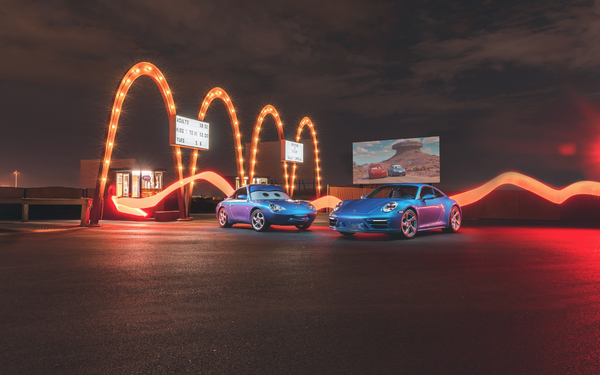 Porsche and Pixar Animation Studios are once again joining forces to create a one-of-a-kind automobile inspired by one of the most beloved 911 models of all -- Sally Carrera, from Disney and Pixar’s "Cars."

Only one Porsche 911 Sally Special will be made and it will be sold by RM Sotheby’s on Aug. 20, with the proceeds going to charity. Bidding for the car is open to U.S. residents. The 911 Sally Special can be seen at Monterey Car Week in the lead up to the auction.

The auction proceeds — the entirety of the sale price being donated — will support young girls through Girls Inc. as well as USA for UNHCR, the UN Refugee Agency, which is working to provide help to nearly 6.2 million refugees who have been displaced across Europe since the outbreak of war in Ukraine.

The project, which began in November 2021 and was announced this spring at SXSW, reunited members of the original "Cars" team who created both the movie car and the life-size Sally Carrera based on a 2002 Porsche 911 Carrera two decades ago.

That team included Jay Ward, creative director of franchise at Pixar Animation Studios, and Bob Pauley, who, as production designer for "Cars," sketched Sally for the first time 20 years ago.

“My own daughters grew up watching Sally, and so it’s a special moment to be working so closely with Pixar on a project that has meaning and will directly help a new generation of children to both realize their potential and, in the case of the UNHCR, find safety and start new lives,” said Kjell Gruner, president and chief executive officer of Porsche Cars North America, Inc., in a release.

The 911 Sally Special is a first for both Pixar and for Porsche, Ward says.

“We decided early on that we wanted to make a drivable 911, inspired by, but not a direct copy of Sally Carrera,” Ward says in a release. “After all, she loved to drive – and this helped guide us. If Sally Carrera was built today in life-size, for the road, what would she look like?”

In the movie, Sally was a former lawyer from California who appreciated style and elegance. But she was also down to earth and had a sense of fun, said Miloševi.

“Everything had to be usable and practical. We really want this car to be driven,” Miloševi says.

The winning bidder also will receive a second set of wheels in the “Carrera Exclusive Design” -- mounted on a custom-made rack -- intended for track use.