By My Estimate, Mobile Is Approaching Half Of All Ad Spending 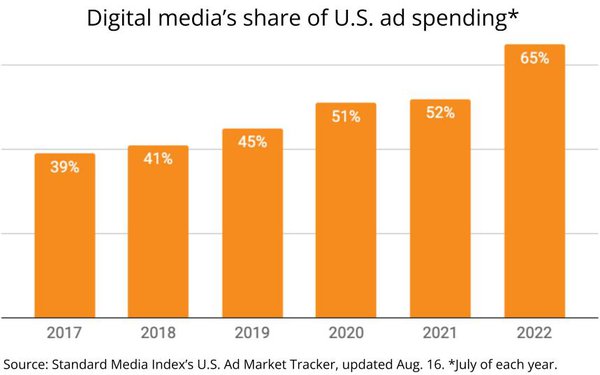 Ever since I began contributing to Mobile Insider, I’ve wondered what mobile advertising’s contribution to the ad economy actually is -- and more specifically, how much of a catalyst it has been for overall ad spending. And while there are a multitude of estimates from various statsmasters, I decided to eyeball the data we publish on actual U.S. ad spending compiled by Standard Media Index (SMI).

While SMI doesn’t break out “mobile” as a discrete advertising category -- at least not yet -- it has been tracking “digital” vs. “traditional” shares of total ad spending and this month, digital hit a new high of 65% of all U.S. ad spending, up from just 52% a year ago.

Obviously, there are many factors driving that surge, not the least of which has been the acceleration of “digital transformation” brought on by the pandemic, as well as the displacement of workforces and purchasing patterns related to it.

But whatever the reasons, jumping from half to nearly two-thirds of ad budgets is a pretty significant leap.

I then took the mobile share of digital ad spending tracking data compiled by the Interactive Advertising Bureau and PwC and projected it will be about 75% this year, meaning mobile now represents about 48.8% – or nearly half – of U.S. ad spending.

Given the acceleration of technology, lifestyle and economic patterns, I would expect mobile to continue to grow that base, keeping in mind that many of the forms of advertising people are experiencing on mobile devices actually are in “other” media such as TV, audio, newspapers and magazines being consumed on the best available screen -- or earpiece.

That said, the next generation of media will increasingly be endemically mobile, especially various forms of extended reality and, of course, the metaverse.

What’s also remarkable about mobile’s recent acceleration of advertising share, is that the advance of a variety of disruptive technologies -- everything from ad blockers, to VPNs to Apple’s App Tracking Transparency (ATT) and privacy frameworks – hasn’t slowed it down. 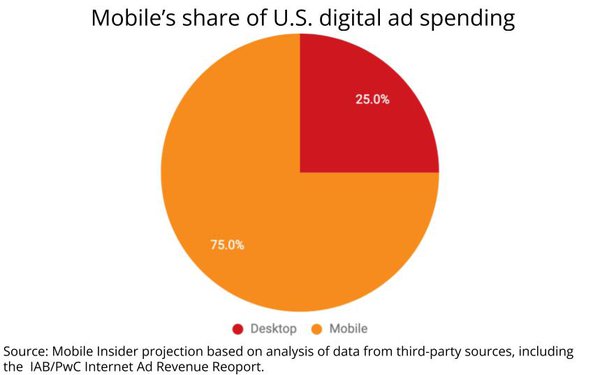