Brand Fetterman: Pennsylvania Democrat Is Running A Campaign For The Ages

When you contrast the popularity of Democratic policies with the relative lack of power Democrats hold at federal and state levels, one can argue that, in its current iteration, this is the most inept major political party in American history.

Democrats think like scientists. If you present the facts, voters will make the logical choices.

Republicans think like marketers. Facts matter, but they must be showcased inside an emotional frame. This is how great brands are created. It is also how candidates win elections.

Pennsylvania Lieutenant Governor John Fetterman is a Democrat who thinks like a Republican. He owns a sizable lead over Mehmet Oz in the race for the state’s open Senate seat.

With Pennsylvania growing redder and Joe Biden as popular as scabies, Democrats have no business leading this contest by double digits, but Fetterman has successfully positioned himself using three elements that are central to brand marketing – repetition, image management, and humor.

Fetterman lacks a punchy tagline, but like any good brand, he has a clear story from which he seldom deviates 00 in so many words, “Just like you, I am a salt-of-the-earth Pennsylvanian. Unlike you, Dr. Oz is an effete weirdo.”

Core to that message is Fetterman thumping Oz, day-after-day, about his longtime residence in New Jersey.

“Snooki” from MTV’s Jersey Shore recorded a campaign video in which she jokingly assured Oz he could always come back home.

An online petition purports to support Oz’s nomination to the New Jersey Hall of Fame.

Fetterman even commissioned an airplane banner that read: “Hey Dr. Oz. Welcome Home to NJ! – John” that flew over the Jersey Shore beaches this summer. 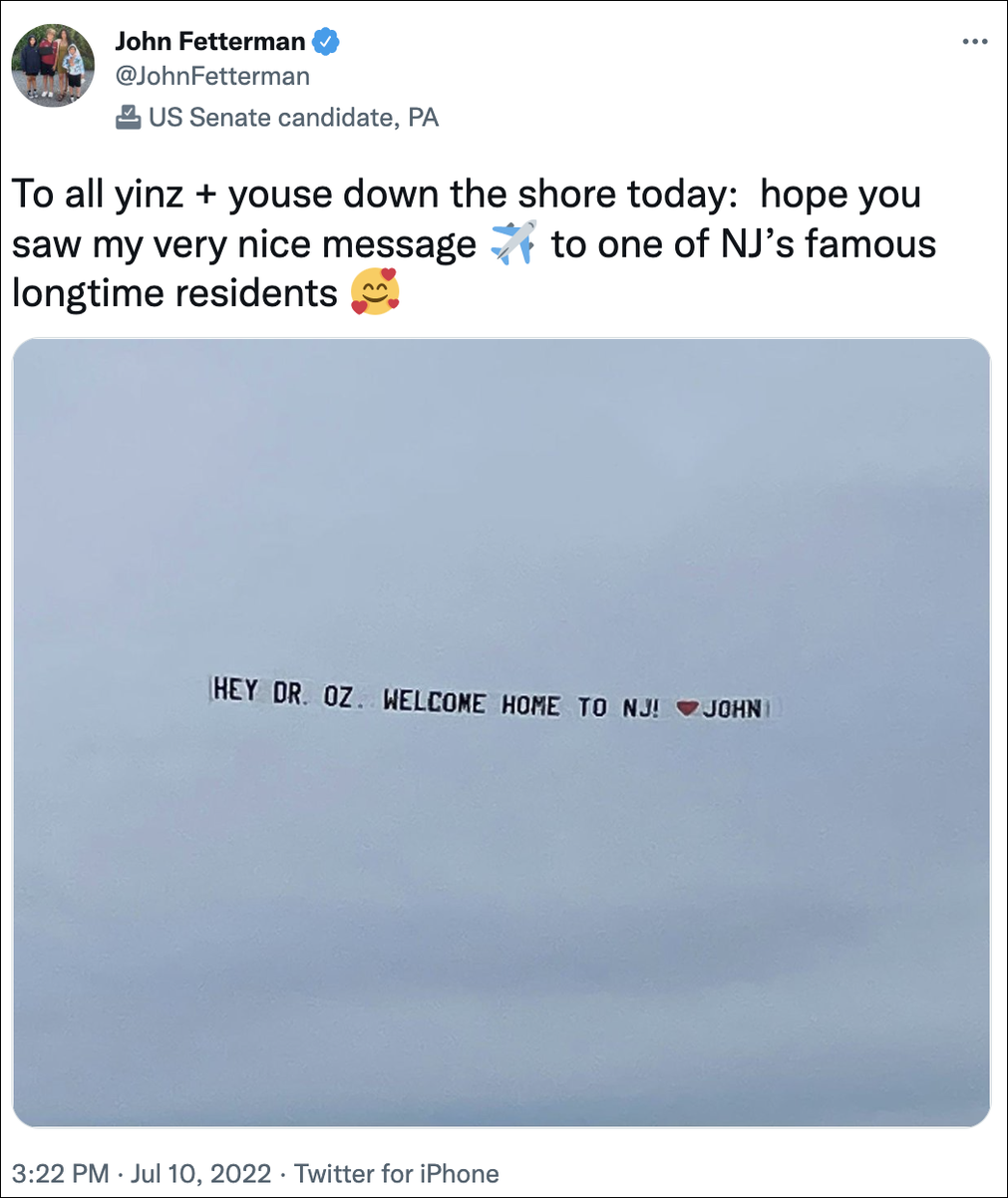 “People don’t care where I’m from,” sniffed Oz. “They care what I stand for.” Perhaps that was true at the beginning, but Fetterman has changed the conversation with a consistent, disciplined message that paints Oz as a shady interloper.

Just like Disney, which tightly controls how its characters present themselves at its theme parks, Fetterman appreciates the importance of optics. His lack of polish is highly polished.

Look at the man. He’s 6-foot-8 with a shaved head, ragged goatee, and visible tattoos. He resembles an adult version of the vo-tech kids you knew in high school, who learned their way around a carburetor in the morning and then snuck out the side door for a smoke after lunch.

He dresses the part, too, donning Carhartt hoodies for campaign events and showing up in shorts to meet the President. In Fetterman’s official Lieutenant Governor portrait he sports a wrinkled gray work shirt and seems annoyed at you for staring.

His campaign logo is simple black-and-white and resembles the Craftsman tools logo. In videos, Fetterman often appears in his home, a refurbished 1920s auto dealership with weathered brick walls and steampunk décor.

All the visual cues tell the same story – Fetterman is a plain working man who gets stuff done. That resonates in Pennsylvania, a state that prides itself on its no-nonsense grit.

It helps that the multimillionaire Oz, who has taken to politics like a giraffe takes to skiing, is such an easy mark. A video of him being a “regular guy” shopping for the ingredients for a crudité (!) recently lit up social media because the entire premise was so absurd. Do voters in Johnstown and Scranton worry about the cost of a crudité? Why is he balancing all this produce on his arms – doesn’t he know how to use a shopping cart?  Fetterman couldn’t have a created a clearer contrast with his own blue-collar persona if he had directed the video himself.

Think of your favorite ads -- the ones you really remember. Most likely, many of them are funny. Humor can disarm an audience and leave them open to persuasion.

Democratic candidates are often either colorless technocrats or tedious scolds. You may respect them, you may even vote for them, but it is like having a proctoscopy to listen to them.

The Fettermans, though, come off like a sitcom family. He and his wife clown each other on social media and he relishes playing the loving, doofus dad to his perpetually embarrassed kids and adorable dogs. 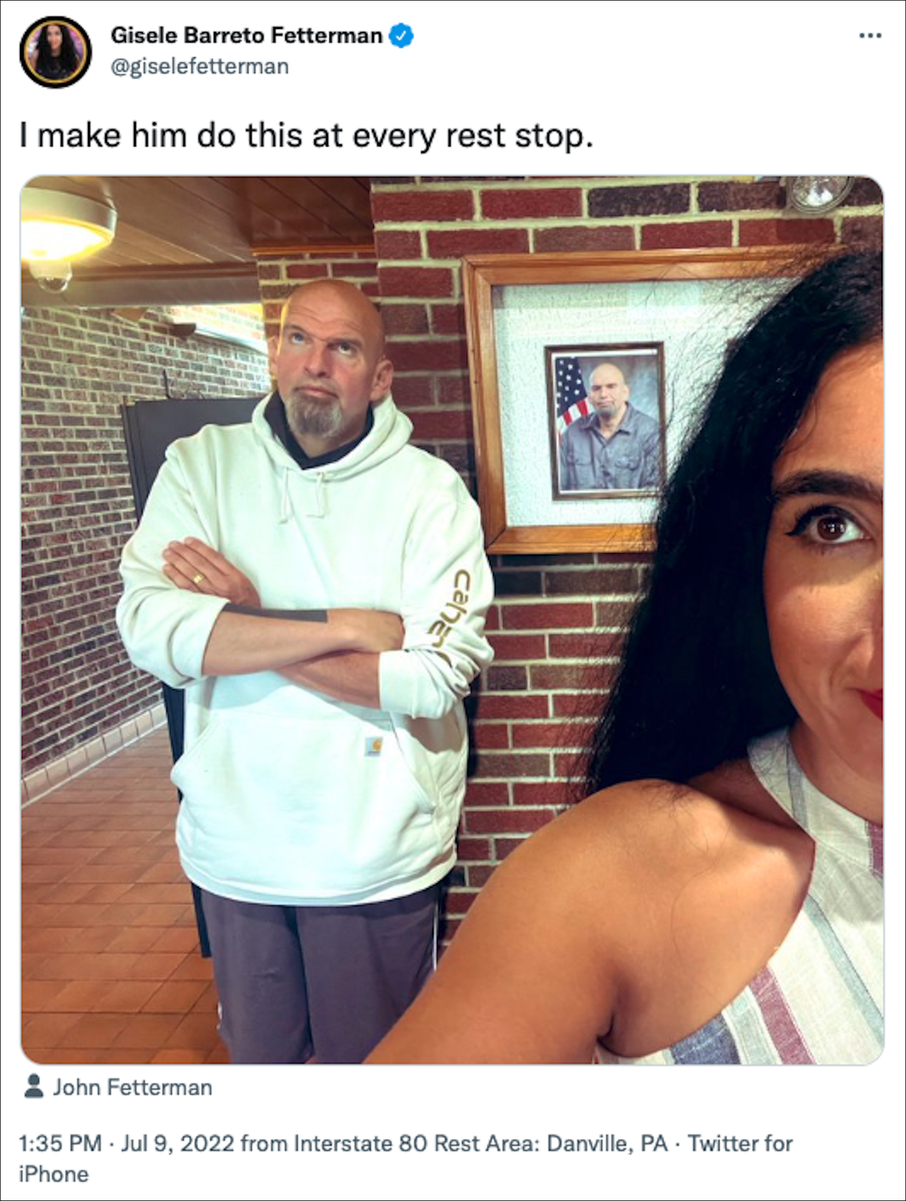 And, of course, Fetterman joyfully posterizes Oz every time he steps out the door -- from “Let them eat crudité” stickers and “How Pennsylvania Are You?” bingo cards to a meme for every moment.  As one Twitter user put it, “Fetterman’s troll game is awesome. He makes me lol when nothing else is funny about politics.”

The GOP has long grasped the importance of appealing to our lizard brain. Democrats usually say whatever their ill-conceived polling and pseudoscientific focus groups tell them to say.

Republicans say and do what they damn well please because they understand psychology and persuasion. They turn non-issues into issues, strengths into weaknesses, weaknesses into strengths.

Fetterman is borrowing from those successful Republicans, not in his ideology but in his messaging -- and he is showing Democrats a path forward.

In the face of self-inflicted structural disadvantages, the party must expand its coalition and win back voters who have found the George W. Bush and Donald Trump flavors of gut-punch populism more appealing than Democrats’ highbrow lectures.

That is a marketing task, and it requires creative, aggressive, disciplined candidates like Fetterman who appeal to the heart, not just the head.